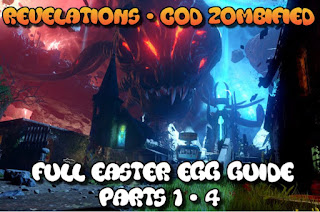 Now if you love scrambled or boiled eggs.....I am sorry to disappoint, but we do have a nice tasty free range gate worm inside the eggs that are available in Revelations for you to enjoy. For this step we need to collect  4 Apothicon Eggs that are dotted over the map, usually one in each area. These can appear randomly in multiple locations such as the Main Spawn, Der Esiendrache etc., we just need to keep a sharp eye out for them, but they are not too hard to spot due to their size.

One for example is shown below so that you know what your looking for:

When we pick these Eggs Up, we need to head over to the Giant Apothicon and place these eggs in the mouths that stick out of the walls in the middle of the Giant Apothicon. The egg will appear here and hover and, you guessed it, needs to be fed on undead souls. Killing the flying Valkyrie style beasties along with the spiders, will help to charge the egg. This will take about 15 to 20 souls to fully charge each one. When it is fully charged, the egg will hatch and you will be given a squishy gate worm for your troubles. 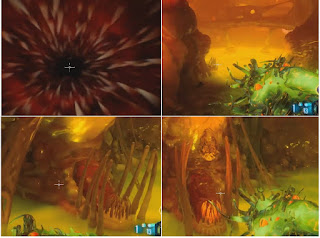 Once we do this for each egg that we find, you need to head to each of the 4 areas on the map, excluding of course the most famous, Nacht Der Untoten area.

So that means you need to head to the following areas with each gate work you hatch:
Now when you arrive in each of these areas, you will hear a strange beeping sound when near certain objects, don't worry I hear it too your hearing is not going already. When you locate the source of the beeping, your controller may vibrate when near it, simply hit the use button on the object and it will place the Gate Worm in that location. After a few seconds a PURPLE "Ruin of Creation" will appear near it, which you can pick up. It will appear where you see a slight white twinkle now and again as shown in the pictures below: 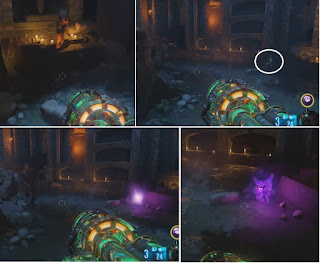 In order to complete this step, we need to find at least 4 eggs on the map, which have tons of spawn locations, simply follow this procedure to pass this step:

1. Find the Apothicon Egg
2. Take it to the Giant Apothicon, place it in egg holder, charge it with souls.
3. Obtain Gate Worm
4. Locate beeping sounds and the Ruin of Creation
5. Wash, rinse, repeat.

Here are some of the spawn locations identified by NoahJ456 in his video. 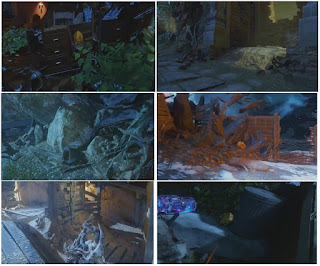 Check out his step 7 for a quick run down on some of the locations he has found of the eggs most popular hang outs, starts at 8 mins 49 secs:

Next we need to head back over to the Spotlight room, just above Kino Der Toten's main stage, where we saw the large purple ruin symbol appear on the ground, created by the flying spirits that came out of the book placed on the podium. Simply jump into the purple haze on the ground and you will be transported to the BOSS FIGHT room. Don't panic and get into a sweat just yet, the boss will not appear until we play a friendly game of Simon says with a book that's trying to kill you. 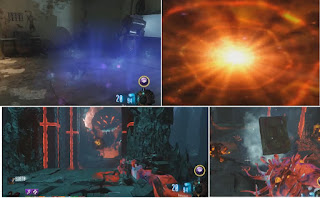 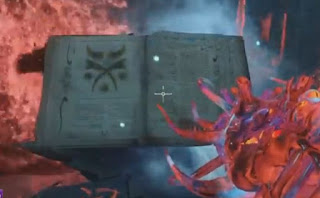 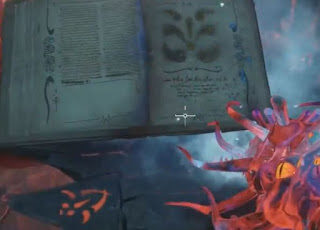 When you appear in the Boss Fight room, you will see a book on a podium made out of stone. Run up to it and hit the USE button on it to start off the Simon Says game.

All you have to do is memorise the sequence that the symbols appear on its magical pages which will turn periodically to reveal these mystical ruin symbols. Write each one down that appears in the correct order shown by the book. Watch out though zombies will be trying to kick your butt while you stand and stare at this thing, so don't forget to watch your back. 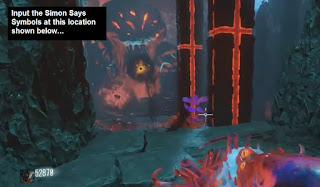 Once you have all the symbols, run to the opposite side of the room  and head up the steps where you will find a purple ruin floating on the ground. What you need to do here is wait for the correct symbol to appear that matched the order they came out in the book that's within the room, then press the USE button on it, which will lock that symbols order in. When you press the USE button, the symbol will turn yellow and stay above the purple coloured symbol until you are finished.

Step 9 - Looking for a fight? You found one!

Once the Simon Says Game has been completed, it will start off the Boss fight which happens in 4 different stages. The Shadowman at this point is going to change the arena you are fighting in a total of 4 times to different kinds of rooms, shooting fire at you, electricity and turning off the gravity etc.....as you do.

The 4 main stages consist of:

1. Fighting Margwa's, zombies and furious zombies in a purple electricity section. Basically you have to kill 2-3 Margwa's in order to end this stage and progress onto the next. Some of the rocks and pillars may actually move to block off your exits or where you are walking so be careful.

2. Once stage 1 is complete, the Shadow Man must have paid his electric bill, as the arena lights up to the way it was before which is great, however he is not through with you yet. This time the arena will change to certain areas being set on fire spewing up from cracks in the ground, lava balls falling down etc. These do hurt if you touch them and be careful to avoid any lava on the ground, flames on the side unless you want to end up as the meat at the zombies weekend BBQ. Again killing 2-3 Margwa's will progress you onto the next stage. 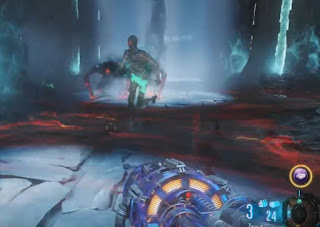 3. After number 2 we have the LOW GRAVITY round where when you jump, you don't come back down at least for a second or two. Think of yourself as full of helium now and your a giant balloon bobbing about the arena....with a machine gun. Simply just stay in the light areas here and out of the dark orangey black shadows being projected onto the ground as they will eventually start to hurt you over time. Kill more Margwa's to progress onto the final stage 4 arena. 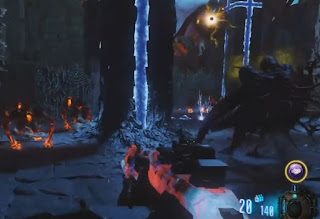 4. Last but not least we enter a round where simply the walls appear to be electrified, shocking I know, the Shadow Mans bill on his electric which was going down by turning off the lights in this area.....has now just went through the roof. You just need to kill again 2-3 Margwa's heads and you are set.

Once this nightmare boss fight is over, or should be Margwa Annihilation, the SUMMONG KEY will fall down into the center of the room and you can pick it up and take it with you.....the spoils of war.

Once you complete the boss fight and pick up the Summoning Key, you will be teleported back to the main area. Once you do, we need to find the following locations in order to Slam Dunk the Summoning Key into key areas and objects. Each time you hit the object correctly, the Summoning Key will glow white indicating that 3 points you have scored for your basketball team.

Each time the Summoning Key will fall back down to the ground so don't forget to pick it up again and move onto the next area. If you lose it, a beam of light will be emanating from it shooting up into the air like Wonder Fizz, Random Crate etc. to make it easy to find. You can also use a melee attack when carrying it and it is a very slow but effective, one hit kill.

First up we need to throw it into the Chandelier in the main stage area of KINO DER TOTEN. 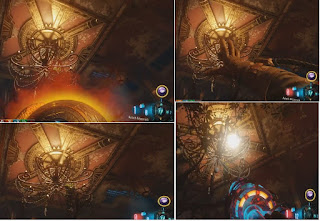 Second, the fountain at VERRUCKT

Third, the clock in DER EISENDRACHE. 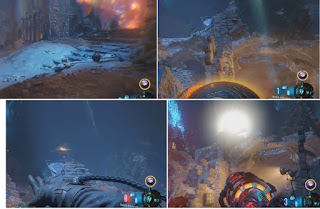 Fourth, the Cell with the Poster in it in MOB OF THE DEAD

Sixth, in SHANGRI-LA the focusing stone near the palm tree

Last but not least, where it all began, NACHT DER UNTOTEN

Once you have done all of these areas by slam dunking the Summoning Key, it will finally disappear. No more basketball skills are required to use it.

Having trouble with any of the Steps? Check out NOAHJ456's video below:


Thanks for reading as always guys