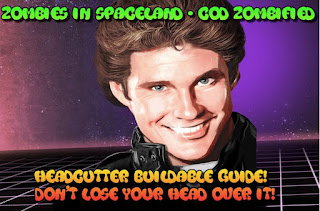 here is how to build the Headcutter wonder weapon in Zombies In Spaceland for Call Of Duty Infinite Warfare. It is a very cool gun that is a one hit kill deal on any of the zombies, but of course, not on enemies like the brute. It is very useful especially in the higher rounds so use the lesser powerful guns first, then when your ammo is depleted, use this gun as it makes an excellent backup weapon to your arsenal. When a zombie is shot with it, it produces a beautiful, and probably toxic, coloured smoke which differs in colour with each kill.

Just don't get too caught up looking at all dem der purdy colours and forget that you are still being chased by flesh eating zombies hell bent on making you the filling in their next sandwich.

Lets find out how we get this awesome weapon. 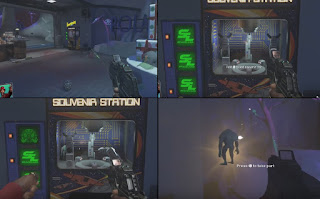 For the first step, which as usual, is the easiest, all we need to do is collect 3 GREEN YETI COINS which will be used to insert into the SOUVENIR STATION over at the POLAR PEAK area, inside the GIFT SHOP.

When you have the 3 green coins, insert these into the machine and it will give you the REVOCATOR along with a lovely little cute YETI TOY which you can pick up by holding in the USE BUTTON. 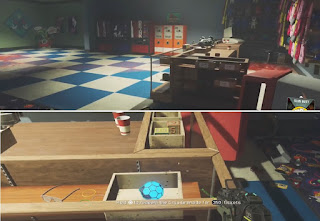 Next we need to head over to the ARCADE area where the prizes counter is located and purchase the CRYO GRENADES. These will be costly as they require 350 tickets in order to buy them, they are useful in themselves as they can freeze large hordes and trains of zombies for you, but we will be using them for another purpose....mainly freezing a giant yeti. 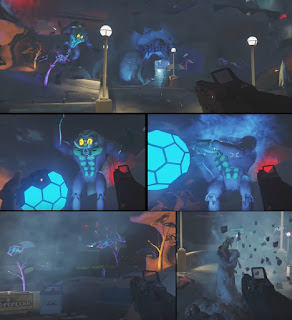 Head over with your CRYO GRENADES to the front of POLAR PEAK where the giant YETI STATUE is standing outside. Simply throw the cryo grenades at his head. When you hit him he will twist to the side and back again, probably in agony after being stung with liquid nitrogen in the face, then he will tilt forward and start hissing and breathing out cold air.

What you now need to do is lure zombies into this cold air and get them to freeze, then do what you do best, kill them. You need to kill about 30 zombies this way, and when you know you have killed enough, the Yeti will let out an almighty roar. This confirms you have completed this step on your way to the Headcutter Wonder weapon.

The cold air will only last so long, so you will need to use your grenades each time to initiate the cold air spewing out of him. This means you may need to go back and purchase more grenades from the ARCADE prizes counter for an additional 150 tickets, or get a max ammo. Either way, the only way to activate the Yeti freeze breath is to hit him with a cryo grenade period.

Once you hear the Yeti roar, head back up to the Polar Peak gift shop, and just to the right hand side of the exit door, you will see the smaller yeti holding his arm up. In his hand you should see the battery for you to pick up, which is the second part of the Head Cutter Weapon. Hold use button to pick it up.

This of course relates to the elemental upgrades of all of the weapons. Check it out to make yourself familiar with these as the activation of the UFO's are needed for each of the 4 Wonder Weapons to be built. 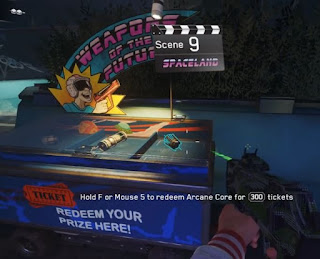 The next thing we will need to do is acquire an ARCANE CORE for our weapon. To do this we will need to first acquire 300 tickets from various challenges, completing rounds and killing zombies etc. Once you have enough tickets, go to a Weapons of the Future cart and purchase the Arcane Core for your weapon.

With the Arcane Core acquired, now all you need to do is go to the Polar Peak and activate the Steel Dragon Trap when you have a large train of zombies in line with it.  This will change the UFO direction if you have killed enough zombies with it, usually around 20 to 30 zombies. This mass slaughter will alter the UFO circling aboves patrol route and it will start to follow a much larger patrol route radius. Simply follow it close by and kill as many zombies as you can with the weapon that has the Arcane Core attached and you will know it is working when you see little blue balls of energy go into the UFO.

Now once you have enough souls charged in the UFO, it will drop a YELLOW ENERGY BALL which will infuse your weapon with the Wind Element. Now onto the next step.


Step 4 - Now I ain't saying that zombies a gold digga!

Now what we need is a BRUTE to spawn. We can force our hand in making him spawn by failing the SETI DEFENCE task each time, or simply by waiting every 5-7 rounds for him to spawn. Once you get one, bring him to the Alligator Trap in the Kepler District for him to be eaten. Alligators eat anything, surely they won't mind munching on an alien for a change.

Run through the Alligator Trap to activate it and lure the Brute into it, The mouth will close but the BRUTE's strength saves him from being eat and he holds up the mouth, but breaks the Alligators teeth, ouch and it wasn't even frozen by the dentist! 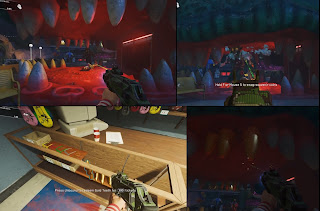 When the teeth are broke and the Brute is free, waste him. We will need to head over to the Arcade area, specifically the Gift Shop where we will be purchasing the Gold Teeth that are in the display case. We will of course, need 300 tickets first before doing this so save them up. When you purchase the teeth, go back to the Alligator Trap and place them in his mouth to give him some very cool new golden gnashers. 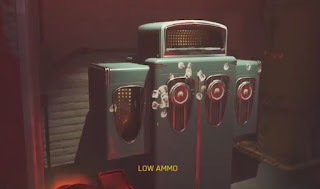 Once the gold teeth have been implanted, it will open up a door within its mouth and reveal a machine with 4 targets that you must shoot with the yellow charged arcane core gun. Simply shoot one of the targets or all of them until one opens and it will reveal a nice yellow gem stone for you to take, this is the final part of the Headcutter, pick it up. 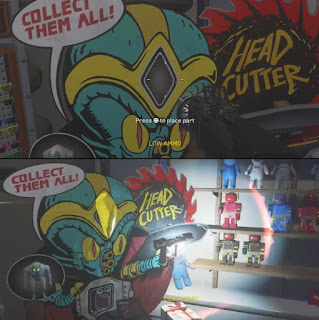 Once you get the Yellow Gemstone, simply head back up to the Polar Peak GIFT SHOP, and to the left of the door where you picked up the battery from the YETI, you will see the cardboard cut out for the Headcutter, simply hold use on it and after a few seconds the parts will be combined, and the Headcutter will appear on the alien cardboard cut out for you to pick up....easy.

If still unsure how to build this weapon then checkout MrDalekJD﻿'s video below: