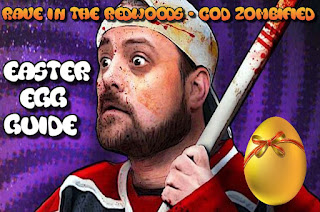 here is the Easter Egg Guide for Rave in the Redwoods for Call Of Duty Infinite Warfare Zombies. I know you guys love to party and p arty hard, but as like with every other zombie map, we have a mission to complete in order to get that kick ass achievement every zombie map offers. The kind of achievement that everyone lusts after, is jealous if you have it and they don't......and the question they always ask is.....how do you do it?

That's why I am here and all the other Youtuber's, Bloggers etc. are out there to make you the best damn zombie player to ever walk this earth.

So lets get busy and get this Easter Egg wrapped up.....just in time for Easter....Nice!

This Easter Egg can be done on Solo or Co-operative mode, of course it will be much easier on Co-op with mates to watch your back and save your ass when you go down. If you do it on solo, kudos to you , you got my respect as no zombie map is easy to do on solo.

Things to do before starting: 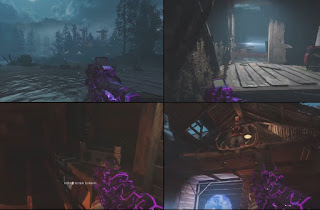 When we have built the boat propeller built and attached it to the boat, and now have a sea worthy vessel, we take the boat ride over to Turtle Island. Once we arrive there, we are going to catch a few radio waves by listening to Kevin Smith's voice on the radio....basically cause its quite soothing to hear during a zombie apocalypse.

When you hold the USE button on the radio, Kevin Smith will actually appear above you on one of the rafters of the roof and start to dish out some juicy information on what he wants you to do for him.

He will ask you to find ripped pieces of photos which contains some of his most precious memories. These of course will be scattered through out the map all over the place and we need to find them for him otherwise.....well his feelings will be hurt.

After speaking with Kevin, head back into the map and head towards the RECREATIONAL AREA of the map. Locate the giant statue / figure in that area and take the little gangway just behind it to reveal part of a photo Kevin is looking for. Simply hold the USE button to pick up when prompted. This photo piece will always spawn in the same location every time so no need to list about 6 different spawn points here thank god. 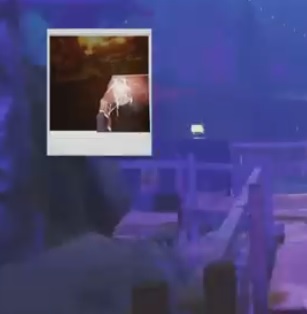 You will notice that the face on the photo has been scribbled out, maybe its an ex girlfriend that dumped him in high school and he's letting his anger out, who knows? No I'm kidding as we actually need to perform a ritual and cleanse the photo so to speak in order to reveal who underneath the marks and scribbles. 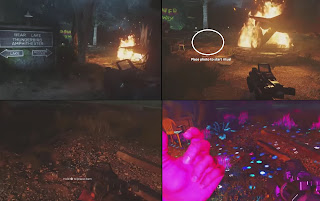 The photo we picked up in step 1 has the face of the person scribbled out, so we will need to perform a ritual to cleanse the photo so we can see the chappy whose behind the scribbles.

This ritual will take place in the amphitheatre area of the map, just past the "Adventure Course", and will require you to place the photo down on the ground beside the bonfire and enter rave mode. Yip people are so fired up to party around this neck of the woods, simply dropping a photo on the ground is as good an excuse as any to start a party :).

Once you place the item on the ground where it prompts you, you will enter RAVE MODE permanently during the ritual. An infinite number of zombies will spawn at this point either until you complete or fail the ritual.

The zombies that spawn are special zombies as in all zombie films, usually we need to shoot them in the head to kill them, but these zombies are the evolution of the zombie race as.....you need to shoot their arms off instead to kill them. For each zombies arm you blow off, its soul will be collected in the ritual circle. killing them normally by blowing their head off, you will notice the soul does not appear when they die.

There is a set amount of time to kill the right amount of zombies in, each zombie you successfully kill and send their soul to the circle, you will notice beads of light falling to the ground and being absorbed into the circle. If the time has run out and not enough zombie arms have been slaughtered, then a NUKE will go off indicating you have failed the challenge. As you did not complete the challenge in time, as you have been naughty....you will lose one of your perks. 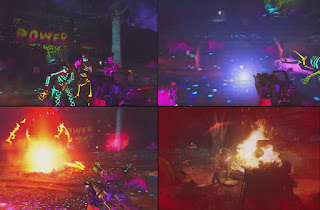 Now when enough souls have been collected, you will notice a BLUE shining light on the ground. Go over to it and hole the USE button when it says "Hold to inspect item". A huge flame will fire up into the air, you will then return to normal vision and a SLASHER will appear also while in normal vision. This guy is different from the pussycat that appears in RAVE VISION as he has a helmet which makes head shots less effective, is 10 times as strong and can run much faster and longer.

So keep your wits about you and don't mug him off anymore than you have to after you have already told him he must die.

When you kill him there will be a KABOOM plus a MAX AMMO left behind by this nutter you just terminated. You will then see a BLUE shining light again on the ground, go over and hold USE button on it to pick it up. This will be the photograph you originally set down and as it's been cleansed, you will see a guy wearing a cap appear in the small section you have obtained. 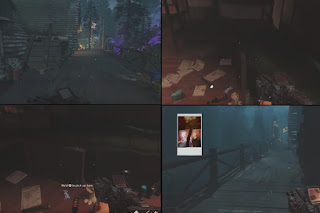 We now need to head back over to the island via the boat ride and talk to Kevin again.
He will chat to us and give us another few quotes where he will then assign you the task of finding the second part of the photograph for you to collect. Why can he not just order his prints to be delivered? We will never know.

Once you return back to the map, head up to the MAIN SPAWN AREA CABIN where TOUGH ENOUGH room. As soon as you walk in the door from the balcony outside upstairs, immediately to the right of the door you enter by, there will be some bits and bobs on the floor and the photo will be amongst these items. Pick it up and again, you will notice the persons face is also scribbled out.

Here we go again with another Ritual to cleanse this photo. This ritual will take place in the RECREATIONAL AREA of the map. To start the ritual, the second photo you found must be placed in the area in front of the Huge Statue in this area. When you place it, zombies arms will come out of the ground forming a circle, and yes you have guessed it, you need to kill the zombies within this circle in a certain way to capture their souls.

This time we need to blow off the zombies legs off to capture their soul. This can be done easily with grenades, explosive weapons or a shotgun, but as you can see in the screen shots the balloon trap is also useful for this part as when it detonates it blows off the legs as well. 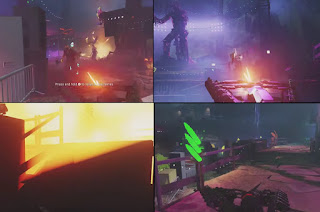 When enough zombie souls have been collected the blue light will appear on the ground again for you to interact with. When you do, the huge burst of flame energy will shoot up into the sky, you will return to normal vision and.....another SLASHER will appear.....this guy just cannot take the hint. Kill him and a KABOOM will appear as well as a MAX AMMO again just like before.

If you have failed any of these rituals don't sweat buckets, you can simply restart them instantly at anytime. the only danger is that you may lose some of your perks each time you fail. 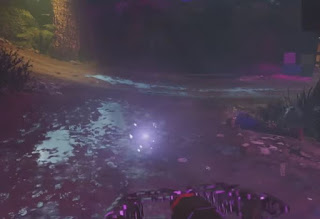 After the SLASHER has been killed, pick up the photo again, the BLUE shining orb on the ground and we are well on our way to blitzing this Easter Egg. 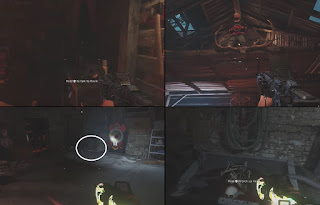 Now head back over in the boat back to Kevin, flick on the radio and listen to what he has to say up on the rafters. He will now want you to find him a SKULL which is located in the room with the POWER SWITCH. 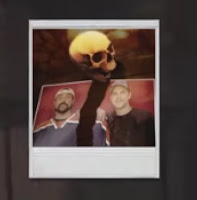 Now that you have this SKULL, you want to take it over to the DOCKS section just in front of SLAPPY TAFFY. We need to place the photograph and skull down to activate RAVE MODE again. This time, we kill zombies the badass old fashioned way, by getting head shots within the ritual area. This will charge up the items we placed on the ground again with zombie souls. 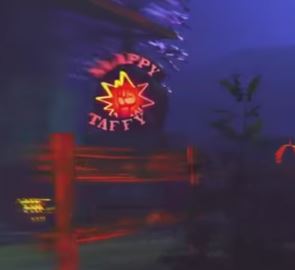 When enough souls are collected, we will exit RAVE MODE to normal vision, and another SLASHER will appear...who keeps inviting this maniac to the party, god knows, but he isn't being invited next year as he's killing all the ravers....numbers are down year on year. 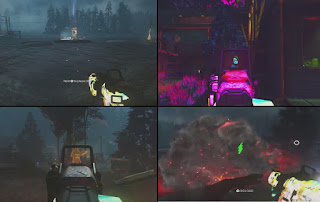 Kill the SLASHER, get the MAX AMMO, do the KABOOM moment and this will be the last slasher guy you will have to chuck out from the party. Then go over to the blue glowing light on the ground and pick up the item again you placed down. 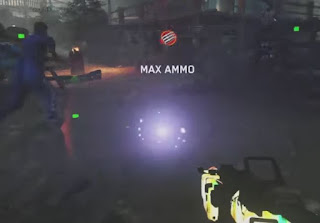 Click here to See Part 2 of the Easter Egg Guide

Still not sure how to do the Easter Egg? Check out +MrDalekJD video below to show you how: