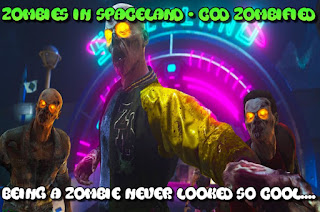 
Step 3 - This map feels Alien to me....time to stop clowning around

Once you have defeated all the crazy clowns from Step 2, its time to meet your maker from another dimension. Once you kill the last clown, head over to the Pack A Punch portal and you will see a red beam of light being emitted from it. Once you get there, it will all become clear that this is where the alien menace has spawned. 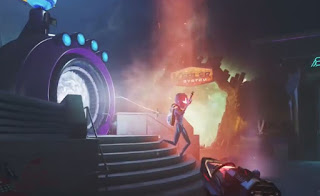 In solo play, we have to:
In Co-op play:
It is much easier to defeat him on single player than it is on multiplayer, but both scenarios are totally doable. We are zombie slayers I mean come on no fight is too difficult to us, even if it is being from another galaxy, we earthlings kick ass....period!

Now when the boss fight starts, the alien will start teleporting all over the place, up on rooftops, at ground level like a madman. What you have to do is simply keep shooting him as many times as you can, preferably with Pack A Punched weapons or wonder weapons every chance you get, until he goes down. 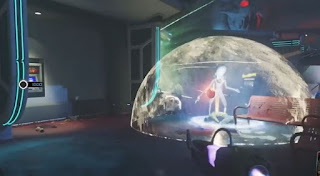 When he goes down, he will emit a bubble type shield around him giving you an indication that when the shield disappears, there will be a brief moment you can knife him in the back. When you knife him in the back, it will allow you to take one of the 2 fuses he has on his back pack. You need to down him a total of 2 times, each time waiting for the opportune moment when he does go down to perform this knifing action to collect both fuses. 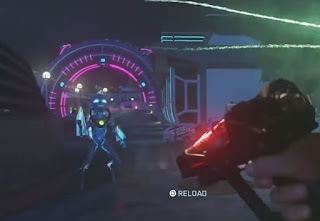 The third time once you keep shooting him for a while, he will not go down but simply die.

Some of the aliens attacks and abilities include: 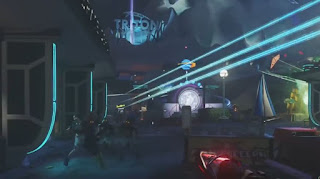 He also has a health meter on his chest, if you can spare a moment to take a look at while your running your butt off for your life, which will either be a constant green, meaning he has full health, a yellow colour, meaning you have damaged him significantly and should be down to half health, and red where he is about to croak it and go down.

Make sure when you down him you have left enough space between any zombies you are training and enough room to get behind the alien, knife him and take the fuses in his back pack he is carrying. If you shoot him and he goes down but zombies are blocking your path to him or slowing you down, he may get up again and you may have missed your chance. Each time he goes down and you knife him, you will get a MAX AMMO for your troubles, so try not to waste a single shot on any of your weapons when fighting him, make every shot count.

If he goes down and you are not able to reach him with the knifing action, and you have ran out of ammo, when he gets back up again, killing a single zombie will make a MAX AMMO spawn, so do not worry about ammo running out.

If you want a great tip from MrDalekJD, check out his video below which will auto start at the point he encounters the alien. He has some great tactics in relation to running in a figure 8 shape while fighting the alien which makes it soooo much easier trust me:


When the alien is resting in pieces, a nuke will go off and reward you with a juicy 1000xp points for your troubles. Now if you head over to the Pack A Punch teleporter, the aliens fuses will be sitting in front of it. Pick up these fuses and head into the Pack A Punch machine.

These fuses will allow you to DOUBLE PACK A PUNCH weapons, oh hell yeah! only after you blow up a huge floating UFO that's trying to kill you....naturally of course :)


Step 4 - You already Punched me now your punching me again?

When inside Pack A Punch, go up to the machine and install the alien fuses you picked up before coming here in the machine by holding the USE button on them. 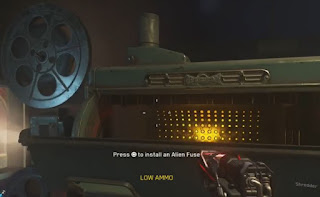 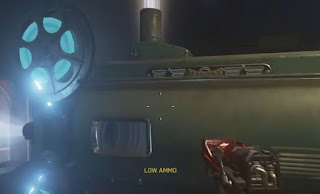 Then when you head back through the portal back to the main spawn area, you will notice there is another giant UFO above you. When you move around the map, this UFO will follow you around. From time to time, it will fire out the blue energy balls like the Alien Boss' gun did, and will hit you the odd time. this will only damage you and not down you instantly, unless you have just been hit by 2 or 3 zombies a second or two ago. 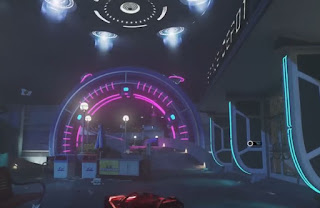 When we want to do is now head over to the SPACELAND sign which is lit up with PINK NEON style lights and on the back of it you will notice 5 square lights that are glowing BLUE. Simply shoot each of the lights and these will turn to ORANGE. When you have shot all of the lights, an energy beam will be projected from this sign, into the PACK A PUNCH portal, which will then relay it through the PACK A PUNCH machine and fire it into the giant UFO. 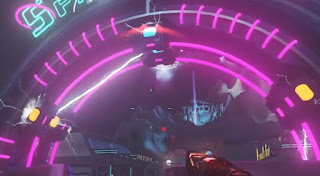 This will cause significant damage to the UFO making it lose control and crashing into Peak Mountain. You must wait though until the UFO is hovering above the Pack A Punch portal otherwise you could miss. 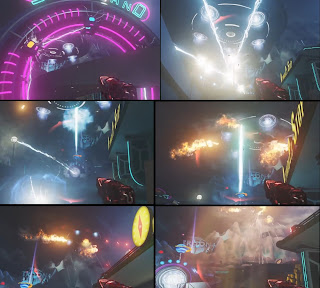 Once the UFO is destroyed, you can pick up the SOUL KEY in front of the PACK A PUNCH portal, allowing you to DOUBLE PACK A PUNCH weapons.

Still stuck? Check out the video below for the FULL GUIDE from MrDalekJD:

This is a lot shorter than most Easter Eggs and out of all the zombies maps, is probably the most doable on single player so it is definitely worth a look in if you haven't got yourself a copy of Infinite Warfare yet.