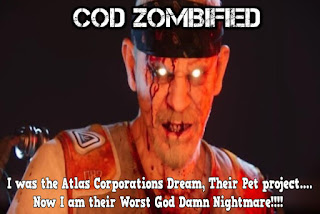 well here we are with the very final DLC content for Call Of Duty Exo Zombies called Descent where we are hopefully going to get some peace from the zombie infestation in this ideal safe haven that Atlas have hidden away in the middle of the ocean....fat chance of that! The zombies are pouring from every nook and cranny in this one which has quite tight corridors in between each of the sections and main areas, not to mention a psycho zombified Oz who is hell bent in killing everyone he comes into contact with.

The initial LANDING AREA as it is called in the loading screen and on the maps scattered around the map on the walls, is a very small and tight space which you spawn in, however it is useful to come back up here using the transit system of little tubes you can activate, kinda the same as the Garbage Chute idea in the other levels, and lets you travel up to here again as you cannot walk up stairs to get back to the start as you have a large drop to fall down to get to the other areas below. 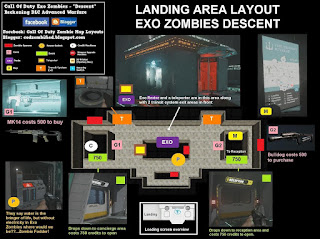 The starting area has the following point of interests listed below:

Getting caught up here in later rounds can be disastrous as the sides around the top part of this area allow only one person at a time really to get through without being hit so unless you have a very well upgraded gun and its in the high levels, I would only recommend coming up here at the end of rounds when there is a pause in the zombie spawns so that you can collect Atlas orbital drops. The best orbital drop is the Huge Juggernaut armour style walking robot which has a very powerful machine gun along with rockets and it can also take a pounding before it blows up.


There are two new guns which are:

Blunderbuss which is a huge old style trumpet ended shotgun which would blow a whole in the planet if you shot the floor with it. It is a very powerful weapon available from the 3D printer but is very slow to reload and definitely recommend getting Exo Reload for the later levels. 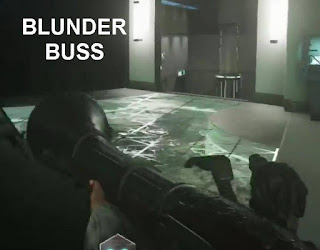 Trident is an energy based weapon that ricochets off walls and ceilings when it is shot. It is very good for going through large lines of zombies and then bouncing back the same way it came for a second much needed hit on a zombie from behind that can sometimes save your bacon. 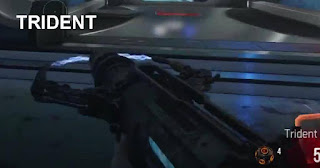 Oz also is kinda like a boss in this one as he takes control of the teleporters at times and teleports you into a room where he uses some of Atlas' most advanced weaponry to try and kill you. This weaponry consists of of laser grids which stop you double jumping from danger with your Exo Suit, automated gun turrets on the ceilings and in doorways as well as very nicely supplying an electrified floor and an overhead poisonous gas dispersal system......just to make you feel special, that he tries to kill you with.

You beat him once and unlock and achievement for killing him.....or so you think....then when you go back to the room again it turns out you have annoyed him big time that he must have started working out as Oz turns into this mega beastie shown below: 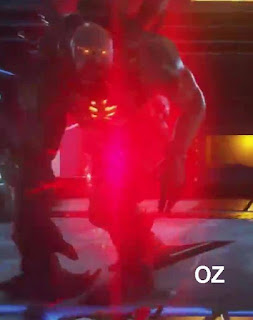 Make sure to keep your wits about you as it is easy to make a wrong turn and get lost in between areas in the corridors. It looks a small map from the overall map layout on the loading screen but it is a very large map indeed and quite complex. Hope you enjoy and stay alive long enough to at least get the achievements  for killing Oz. You will also unlock a special new video sequence which helps unravel part of the story and shows Lilith killing Oz...who knows are there more videos unlocked the more we play? We shall see....

Thanks for reading as always