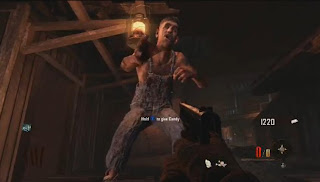 I have played the whole buried map today with a friend online and built all of the build tables and have to say some of the new machines that are built using the parts are fantastic. One is like a mechanical saw that you can place on any wall, rock, door and is activated by a zombies or yourself coming near it and chops the person in half.

Another machine that you can build is the classic trample steam from die rise which is always a favourite. Another machine is the resonator which uses the power generator from transit and attaches a speaker to it which belts out a huge noise periodically and confuses and kills the zombies. Also stuns you if you get too close.
The other two I have forgot but will include in videos and the map layouts. Got into the church in the graveyard which has a vulture perk machine in there but have not been able to get it yet as each time I get there have ran out of money. Also got into the haunted house and died there where the ghosts spawn like dead zombie woman maid ghosts or something they look like. The Double Tap perk machine is in the haunted house.

There are also 3 new weapons in the game, the time bomb which is shown in my using Leeroy video, the Ray Gun Mark 2 and the PARALYZER gun which slows zombies down but if you hold it on them they explode. It has infinite ammo but can overheat.

I also figured out how to use Leeroy the giant to either destroy barriers or attack zombies for you. This is explained in the post linked to above at the start of this post entitled "Using Leeroy the Giant". He is very useful.

Here is the map layout for the second level for when you fall down the shaft from the first spawn area into the village below. For each building I will be making a small map for each one as the map is so big and large that it could go on forever. 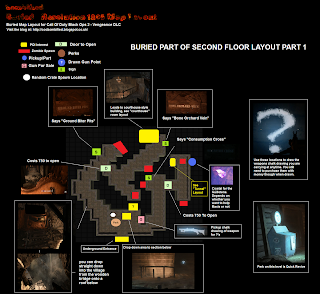 Thanks for reading guys keep checking back as I update and add each level and part locations etc as I find out where they all spawn.