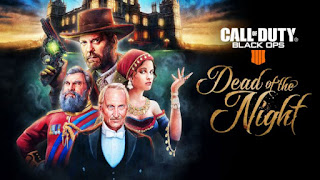 Dead of the Night - Map Layout

here is 2 map layouts for the awesome level "Dead of the Night" that is included within Black Ops 4 Zombies. This map has not been created by me this time as there is no use inventing the wheel and I thought these 2 maps are actually very good and informative. 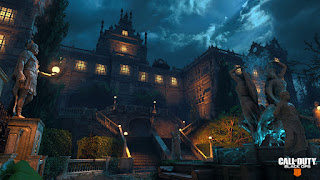 I will be going over all the usual secrets and Easter Eggs at some point as I catch up on all the stuff I have missed due to being not well for a lot of last year and working full time.

This map layout is a general overview of the level with the key locations marked on it.

This map was created by PvtLoganator 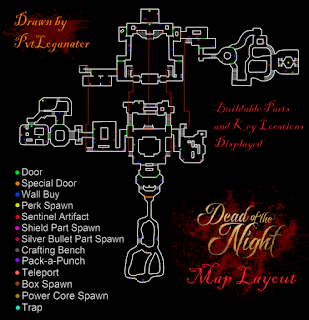 This next map layout is a more detailed view of the level with the key locations marked on it.

This map was created by Sandkastles 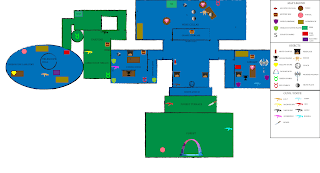 "Dead of the Night is set in Alistair Rhodes' mansion in England. The map is quite large, beating out IX but is smaller than Voyage of Despair. When players first spawn in, they will be divided by a barrier that can only be opened by acquiring the map's Sentinel Artefact, acting in a similar manner to Verrückt and Voyage of Despair.

When a player opens a door on one side of the barrier, the other set of doors will open on the other. When the player reaches the Sentinel Artefact and activates it, more of the map will be opened up. 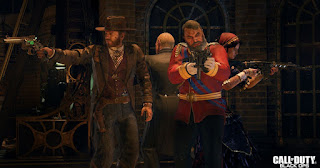 There are also small hallways that connect the main hall with the dining room and library, and beneath the grand staircase is the wine cellar. In each of the main areas at the end of each direction are fast travel portals which brings the player back to the main hall. There is also a fast travel portal in the entrance hall that brings the player to the forest once the latter is unlocked.
This map also features different spawnable locations for each of the Perk Altars aside from Danu Altar. While Danu will always spawn in the entrance hall, Ra, Zeus, and Odin will spawn at either the forest terrace, wine cellar, gardens, or mausoleum."

Over view text referenced from: https://callofduty.fandom.com/wiki/Dead_of_the_Night


Thanks for reading as always.