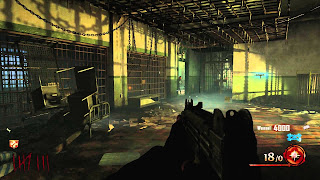 Didn't get a chance to post this layout and the roof layout last night as played a 3 player game and built the airplane in Mob Of The Dead zombie map. The airplane was interesting, people say it ends the game and you escape etc, but as my friends built it while I kept a zombie alive down at the docks area, I saw them fly overhead taking off from the roof after putting the last part on and towards the red glowing beam in the sky in the distance.

Now this red glowing beam isn't the end it is actually, Whack-a-punch they were telling me. To get back my friends had to power some things on or use afterlife I was told. Whatever way they got back, when we were all back in the prison, 5 new symbols appeared in the top left hand corner of our objectives, which are 5 jerry cans.
Now we worked out that you probably have to use these to refuel the plane again to get you to whack-a-punch, as the whole point of zombies isn't really to escape, but to survive the longest. Just make sure everyone is on the plane who has enough money to get whack-a-punch and if someone can't afford it, leave a crawler or 1 zombie alive to let them upgrade their weapons.

I wonder if the new guns can be upgraded in it like death machine or the tommy gun would be cool to see. The Acid Gat Kit we also built is actually for the gun that you get in the random crate called the Blungergat gun which turns it into a super acid zombie melting gun :).

Here are the map layouts anyway for the infirmary level which is in 3 parts as it spans a large area, here is part 1: 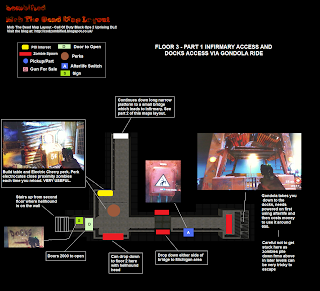 Part 2 shows one of the acid gat kits parts 2 spawn locations and how to access the roof using afterlife and turning the power on to open the door in part 3 of this map layout: 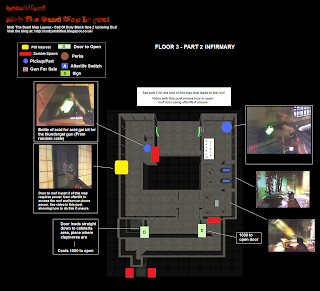 Part 3, last but not least shows an airplane part that needs wardens key to open, hellhound location, afterlife panel to use to kill yourself and power roof door and the dead shot daiquiri perk: 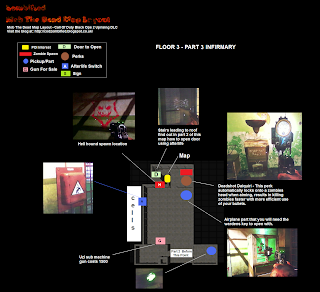 Here is the short video of how to access the roof doors power supply using afterlife in the infirmary:

Thanks for watching and reading guys.