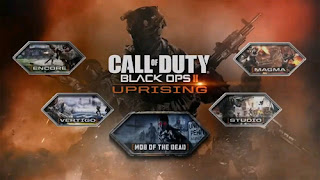 as you have already seen the message when you boot up Call Of Duty Black Ops 2 that the new DLC content called "Uprising" will be available from April 16th, possibly April 19th in UK some people have suggested, I can promise you that I will get to work on the maps for it right away.

It looks very interesting and some big name stars are starring in this incarnation of zombies such as Ray Liotta, Chazz Palminteri, Michal Madsen and Joe Panzarino which should make it feel a lot like a horror movie and just totally EPIC! :).

If you haven't seen the layout of the 4 new multiplayer maps there is a video below to show you how they look and a sneak peek at the new zombie map. One of the multiplayer maps has a reincarnation of the very popular multiplayer level from the previous Black Ops which is "Firing Range", incorporated into the studio / movie environment in which it is set, which will please a lot of fans.

The 4 maps are called Studio, Magma, Encore and Vertigo. Check it out below and see what you think its gonna be awesommmmmmme :):

Looking forward to creating the new maps for Zombies but perhaps using a different technique rather than using Microsoft Paint which is very time consuming. I may use my FPS creator to create the layout and it will allow me to add obstacles and scenery to make it much more detailed and visually appealing.
It will also be a lot more accurate in terms of size etc as I can easy paint the layout in this editor and correct mistakes a lot quicker.
See you in about a week or two time guys :) over and out.
Henry ﻿