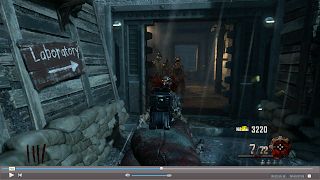 here is the 2 parts to the trenches that lead from the two doors exiting the Laboratory and lead onto the Tank Station and the Workshop. It also passes by Generator 3 which you can activate while here and Generator 2.

There are some zombie shield parts to pick up along the way as well as some dig sites to use the shovel on to get either parts of the staff, extra weapons, bullets, money, or boobie traps from. Don't forget to pick up the claymores as the giant zombie that appears from time to time and chases after you with his grappling hook and flame thrower appears to get stunned by walking into the claymores and gives you a few brief moments to try and shoot him in the head through his helmet, once the glass is broken in it.

Here is the layout for the first part of the trench on the ground floor. Its a large file so please give it a few seconds to download: 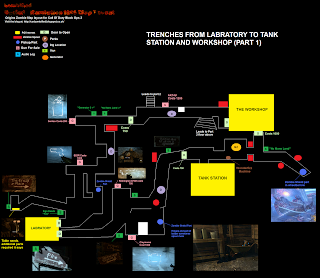 Part 2 in the trenches and generator 3: 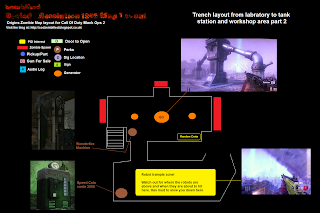 Thanks for reading guys I will keep updating the maps as each day goes by and get a few spare moments from playing this awesome map.
Thanks
Henry
Posted by Hazzman at 16:45