Hi guys if you logged into Call Of Duty Black Ops 2 today you probably saw the message for the new map pack coming out called "Vengeance".

Again it offers 4 new multiplayer maps along with a new zombie map called "BURIED" which is set in an old western style town. It also features a new weapon called the RAY GUN MARK II which sounds very interesting indeed.

Its coming out of course on Xbox Live first and then PS3 and PC will follow. The 4 multiplayer maps are called Cove, Rush, Detour and Uplink. check out the attached video to see the preview video. I will be doing the secrets and map layouts for this map also and hope to start uploading form the day it is released the different areas and levels, along with their secrets.

Looks like this one is going to be fun!
Henry﻿
Posted by Hazzman at 20:11 No comments:

here is how you activate the amazing song by Johnny Cash called "Rusty Cage" in Mob Of The Dead in Call Of Duty Black Ops 2.

Its very easy and the songs blends very well with the scenery and with the killing of zombies :) everyone needs time to relax, even an alcatraz escapee and a bad ass zombie killer so why not enjoy your time on alcatraz with this song? :D

Here is how you activate the music, there are 3 drink bottles located around alacatraz, one in the library at the very start of the game which can be picked up before opening any doors at all, next one is in the docks hidden beside a crate and the fence, last one is in the infirmary where the two bath tubs are filled with blood. It sits on a surgeons trolley in that room. 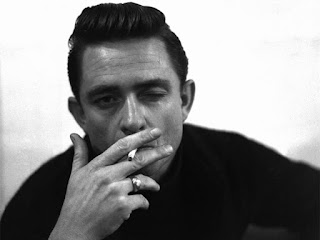 Check out the video if you are unsure of how to do this or what they look like. The song is worth a listen Johnny Cash is a legend and if you listen to the lyrics of this song you will find its very fitting for the location and just really cool I have to say whether your old or young.


Thanks for reading guys.

Mob Of The Dead "Hells Redeemer" - Upgraded Tomahawk, how to get it!

Mob Of The Dead "Hells Redeemer" - Upgraded Tomahawk, how to get it! 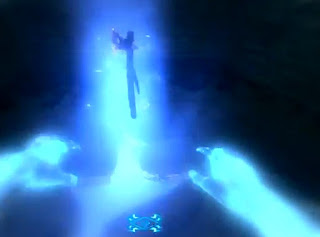 you have probably heard there is an upgraded tomahawk in Mob Of The Dead and your probably wondering how to get it. This post shows you in the below video how to get it and the steps required to finally pick up the tomahawk which has to be done in afterlife mode.

So far from what I have seen and the guy in the video also mentions that only one person can only have the upgraded tomahawk in a two player game, I have not tried it in 4 player so it may be different, however you guys can be my eyes and ears who play 4 player and let me know :).

To get the tomahawk you basically need to go to the Golden Gate Bridge via the plane with the original tomahawk equipped, then you need to finish a round or do a whole round on the bridge only using the tomahawk to finish off the remaining zombies.

You then go back to the prison through the electric chairs once the round is over, go to where the first dog is in the Michigan Area and the B32R automatic pistol is on the wall. You look down where the zombies climb up from underneath the platform and you will see a lava pit. You throw your tomahawk into the lava, then run down to the showers and electrocute yourself into after life. The go back to where the original tomahawk is located, in the room with the 3 dog heads above the wall, and pick up the tomahawk which has now turned a blue colour.

Go back and revive yourself and when you throw the new tomahawk it will be a blue colour making it slightly more powerful than the red tomahawk. You now have the "Hell's Redeemer" tomahawk upgrade. Check out the video below if your unsure how to do this: 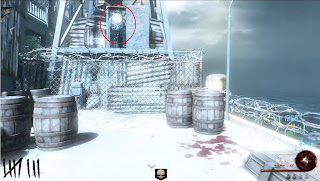 Here is how you get the "Trapped In Time" achievement and how to upgrade the sniper tower to turn it into the rocket launcher tower for a brief period of time.

To upgrade the sniper tower is easy, go down to where the random crate spawns at the docks, just above the switch to activate the sniper tower, you will see the symbols for afterlife. Go and shock yourself with the afterlife switch near here at the docks, where the aircract oxygen tanks are held behind a fence, go over to below the tower, and shock the power switch as shown in the picture.

This will upgrade the tower to a rocket launcher tower which is very useful I can assure you.

To get the "trapped in time achievement" simply activate each of the traps, you will need to activate the:

Its that simple and it will get you an extra 15 gamer points. There is a video I found online on youtube to show you how this is done below, start from 13 mins and 37 seconds onward:

Thanks for watching and reading guys hope this was helpful to you.

Mob Of The Dead - Hidden Secrets - Spoon Melee Weapon and Hidden Blundergat and how to complete the level by breaking the cycle. 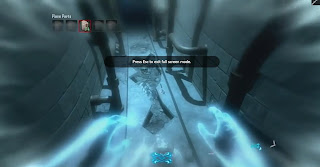 long time no type for the past few weeks I know :) I have been catching up with all the latest Xbox one footage, news and games and am totally blown away by it. Anyway back to Call Of Duty Mob Of The Dead secrets!

I have found on youtube a video that shows you how to get the hidden spoon melee weapon. You will need the hells retriever tomahawk first, and then you will use it to throw at a cell just outside the wardens office, which contains a poster that when hit with the tomahawk, reveals a hidden portal symbol.

You then use the afterlife outside the wardens office door and just to the left of the afterlife switch, you will see the portal which wasn't there before. In it you will a spoon which you electrocute and you will hear an evil laugh when you have done it.

You then go to the cafeteria and use the tomahawk to get the second spoon from a trolley just outside one of the zombie spawn windows inside the cafeteria. 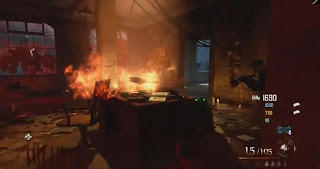 The blundergat comes out of the wardens office's table when you collect all the skulls using the tomahawk which are spread all around the map in various cells, one outside the wardens office on the power lines, one on top of a lamp post on the docks, one on a pier stump on the docks and one on the roof. Check out the video below that will show you all of the skull locations. It also shows you how to complete the level.

Cannot wait for the next map pack to come out.