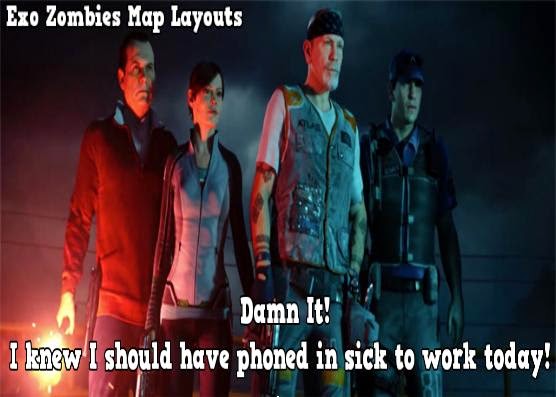 HAVOC DLC is finally here with its 4 new multiplayer maps and the epic zombies game mode returning but from a different studio, Sledgehammer Games, who seem to have done a very good job in this reincarnation. 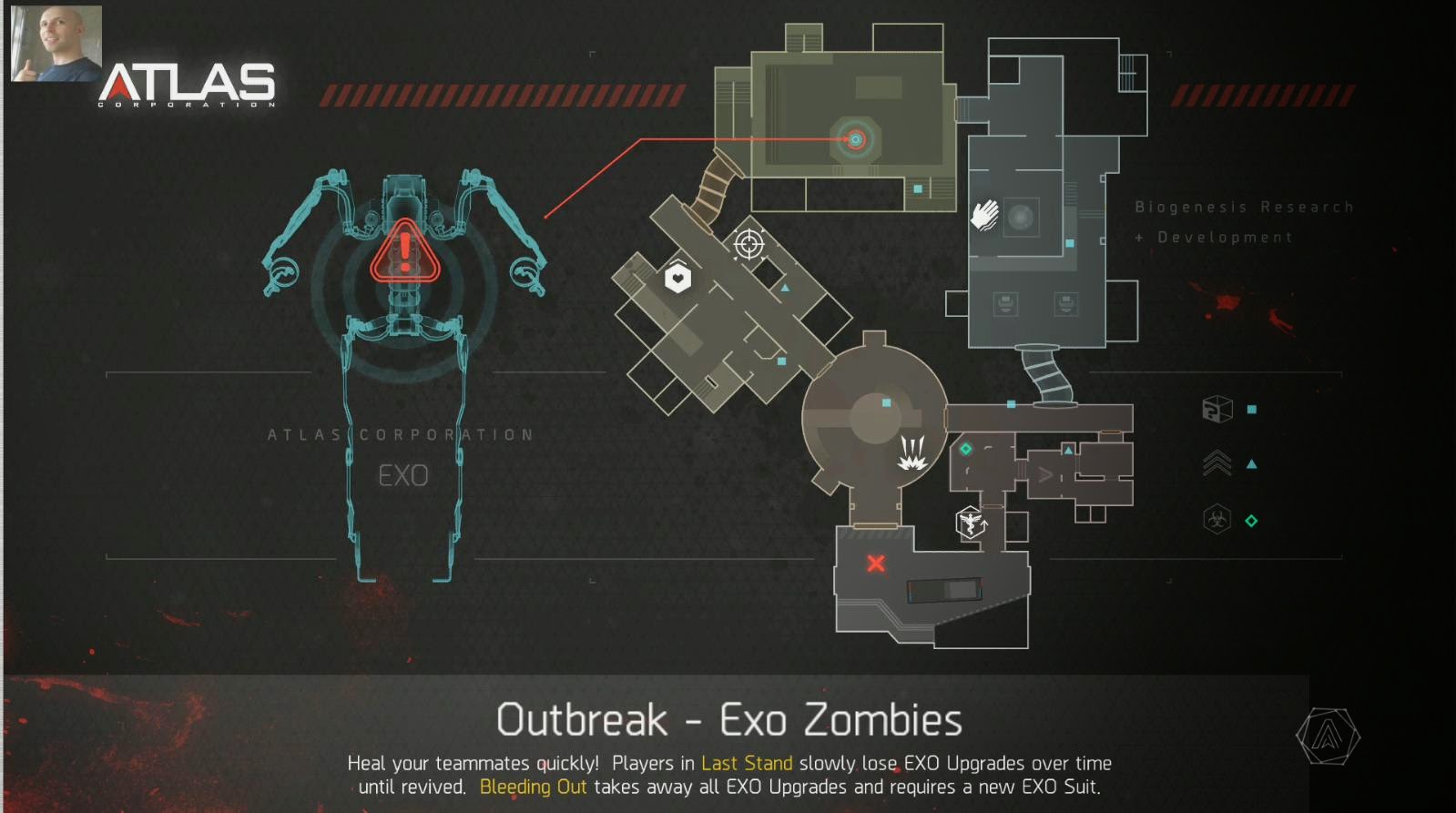 I have played about 1 hour worth of zombies tonight and am enjoying it a lot! Unfortunately I have to get up for work early in the morning which sucks I know but the bills won't pay themselves :) which is why I have kept this initial post on this zombie map Atlas quite brief.

I wanted to get started on the map layouts right away.so have managed to get the outside spawn area of the level called "Atlas" completed, along with a few of the outer rooms in the complex, which are quite small. More will be added as I get further into the map and any secrets or things I have missed will be updated on the posted pics.

It is a very different game to the normal zombies we are used to as the zombies seem to be tougher, more agile and a lot smarter than your normal average Joe of a zombie. Its strange and hard to describe, but any veteran zombie player will know what I mean when they play it, they just move in a different way which is freaky.

Map Layout Of Outside Spawn Area Of Atlas: 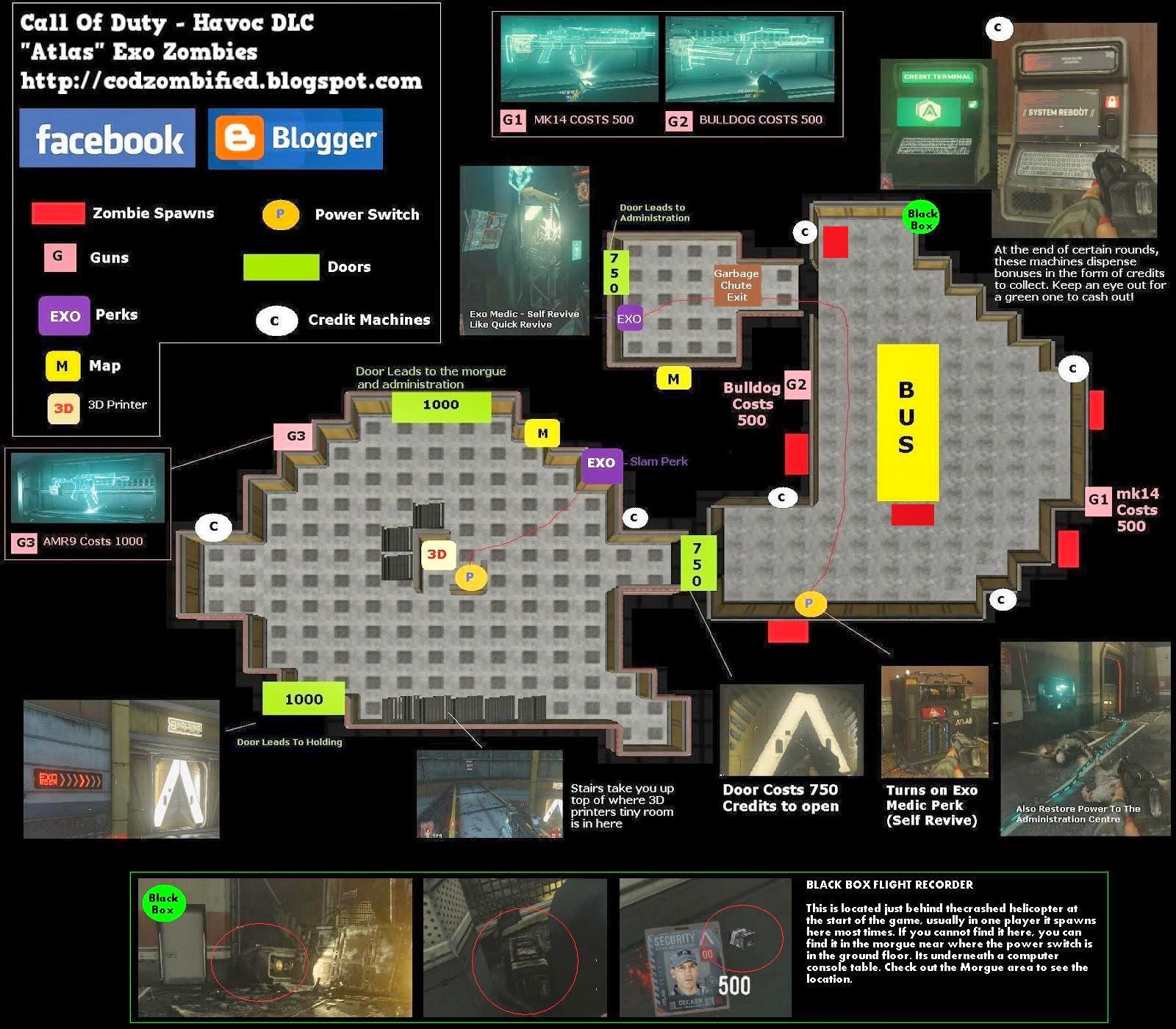 Black Box Flight Recorder PART FOUND - I have found part of the Easter Egg for this level which is the black flight box recorder of the crashed helicopter. It spawns outside where the player starts the game and is just behind the helicopter wreckage. If it is not found here, usually in multiplayer, I have found it in the morgue under a computer console near where the power swtich is located.

A list of the powerups I have run into so far are: 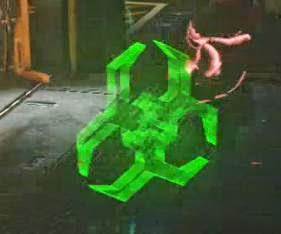 DNA Bomb - Like Kaboom in the other zombie games, hopefully not as radioactive as a nuke. 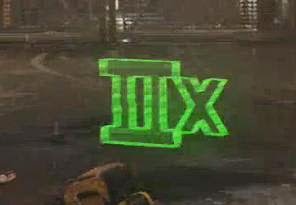 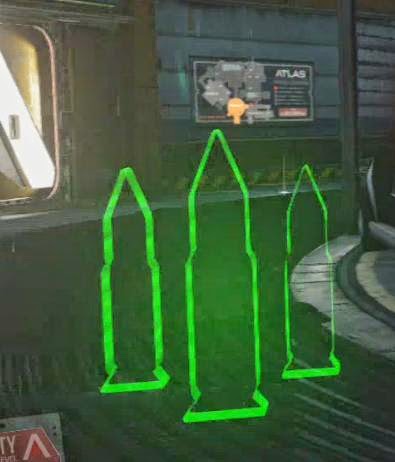 Full Reload - same as Max Ammo, turns you into Rambo, more ammo than you can carry. 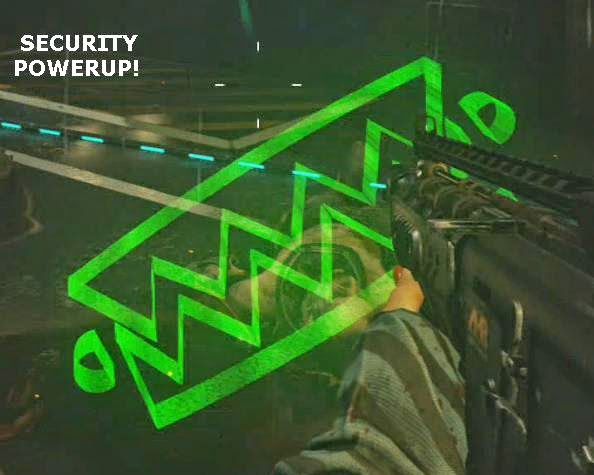 Security - Cool feature, as there are no boarding up of windows, when security is activated, doors that you have opened, act as a guilletine, closing on zombies that dare pass through it, chopping them in half. I guess the zombie meat will be turned into dog food....no use wasting a good zombie :) 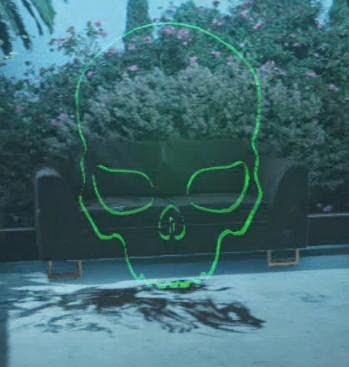 Hyper Damage - same as insta-kill in other games. Throw your shoe at a zombie and kill him.....feel like a god :) 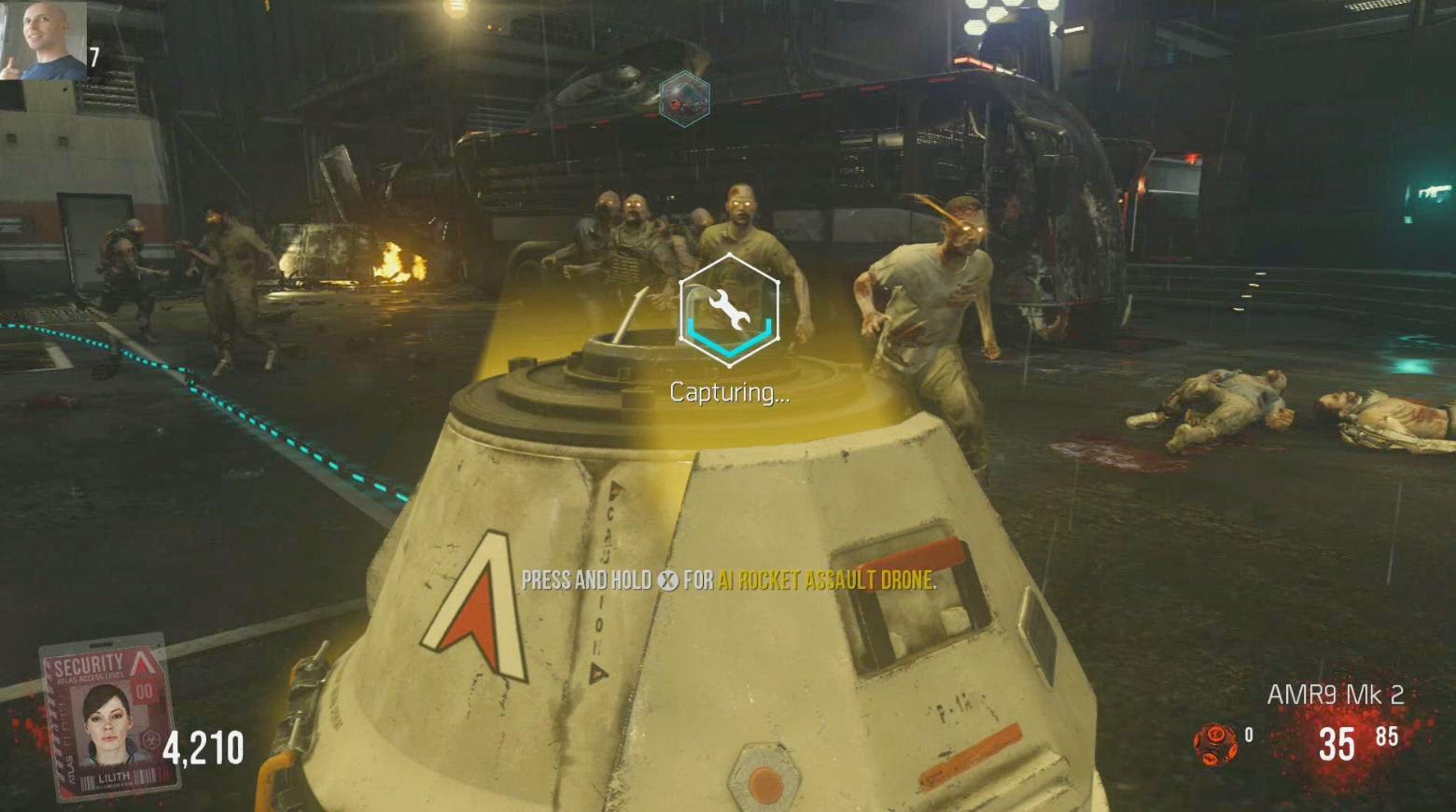 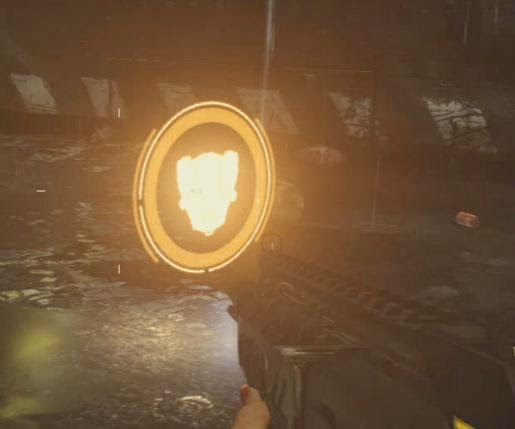 Power / Energy Overload - This is basically a firesale from previous zombie game types and turns on all 3D printers so that you can purchase an item from it for only 10 credits. Its a bargain if you ask me, have as many goes as you can until you two weapons you are 100% satisfied with. Even if you have two good weapons try it anyone to get a distraction drone, which are really just monkey bombs.

Camouflage - Is basically the same as Zombie Blood from the Black Ops 2 Map "Origins". Although this one is not as messy as opening a vat of blood and pouring it all over yourself, ruining that nice Atlas uniform everyone loves so much. Zombies will ignore you when you have this on and is best used when your about to be cornered, or when a team mate has gone down and is swarmed with zombies around him. Shooting the zombies while having this on means they will not attack you.

Orbital Drops - Drops rocket turrets, rocket drones that follow you etc. very cool. Someone from Atlas is watching but do they really care whether or not you make it out alive? Que X-Files music! The truth is out there in the legion of zombies wanting to eat you for lunch! Go have a look :) Lookout for where they will land with the Shield typeicon that appears and a large whooshing noise with a bang means they have landed. 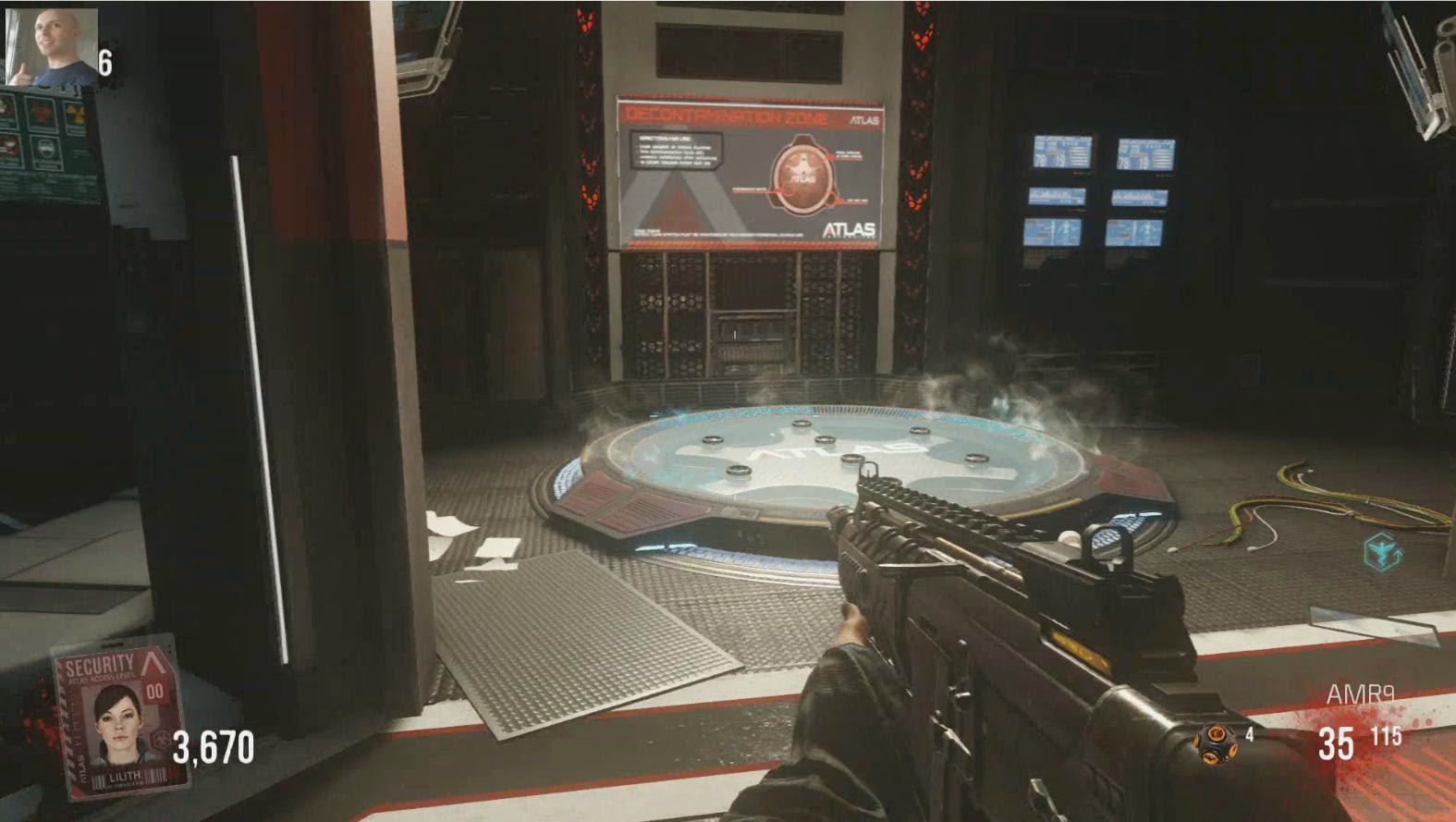 I ran into the Decontamination area which is just behind the Administration door, beside the Exo-Medic ability. Its used for when, in later rounds, zombies appear which eminate green smoke and attack and cough all over you. You become infected and start losing energy and need to get to the Decontamination and activate it to stop it affecting your health. Some zombies have bad breath I tell you! 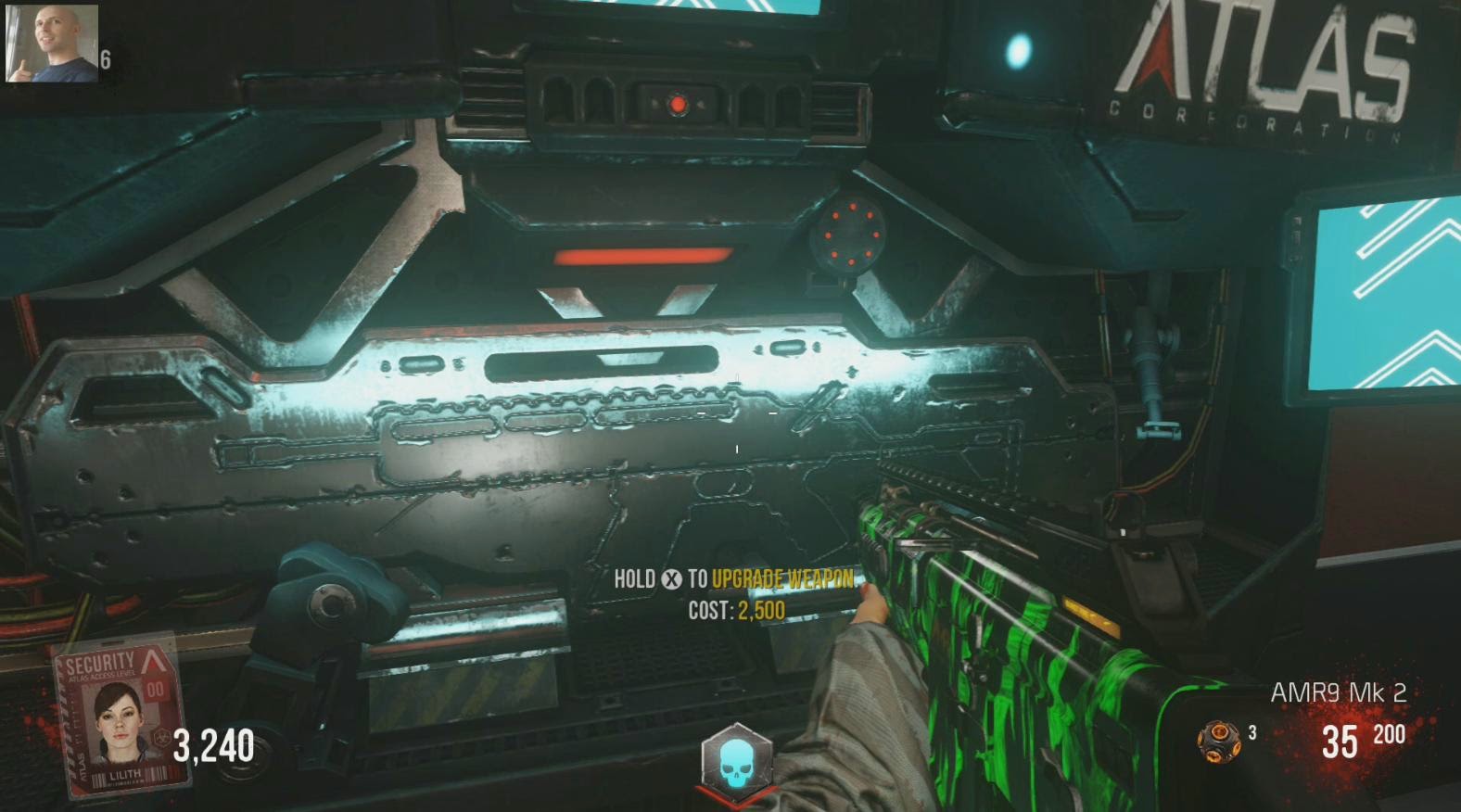 I also found a place to upgrade the guns just around the corner from the decontamination unit. I got new camo on both guns and the pistol appeared slightly stronger in round 5 when I upgraded it, as I upgraded it 3 times. 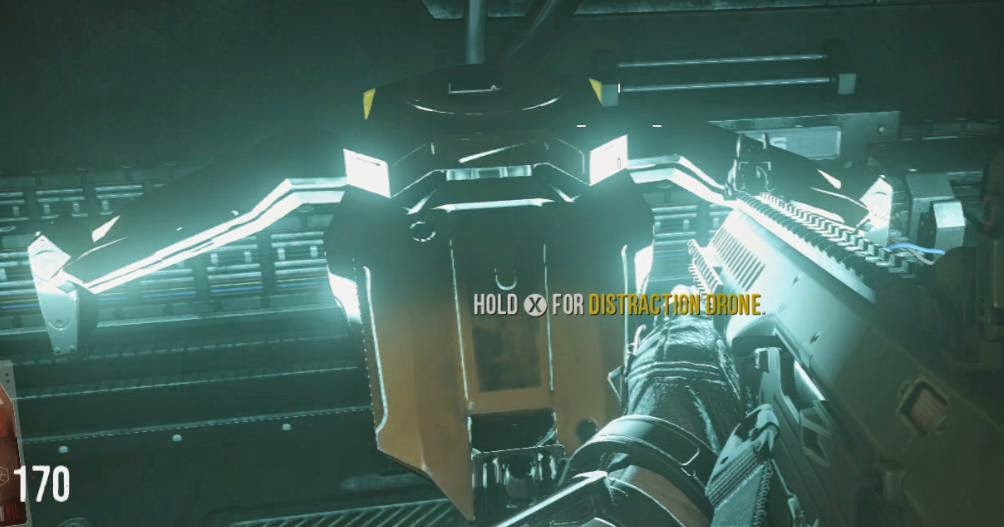 Keep an eye out for the DISTRACTION DRONES shown above, they are life savers as they are monkey bombs essentially which generate a loud noise, making all zombies run towards it, then ends with a nice surpise of BOOM!

The dogs are also back, when the voice over the intercom shouts out that the "Kennels Open", you better have some doggy treats on your person or a ball to throw cause if not.....RUN!!! OR just shoot them with a huge automatic weapon sometimes works as well too :).

I have to get some sleep before I turn into a zombie from lack of it, so goodnight and I will add more posts tomorrow night. Thanks for reading guys.