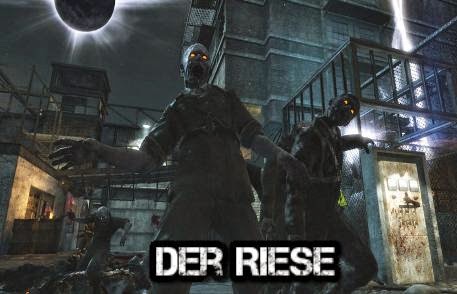 Der Riese (German for The Giant) is the fourth map in the Zombies game mode. It is the final Zombies map in Call of Duty: World at War . It is set in a secret Nazi facility in Lower Silesia near Breslau, Germany (now Wrocław in Poland), and was the debut of the teleporters and the Pack-a-Punch Machine, a machine that for 5000 points allows players to upgrade their weapon. It was released in Map Pack 3, along with three multiplayer maps. The map pack was released on August 6, 2009. It was then released on the iOS on September 30, 2010.
It was then released along with Nacht der Untoten, Verrückt and Shi No Numa as part of the Prestige and Hardened editions of Call of Duty: Black Ops on November 9, 2010. It was later released in the Rezurrection map pack. 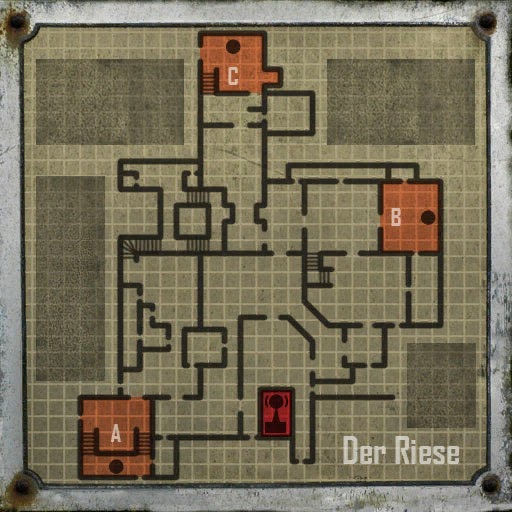 Starting Room/Mainframe Der Riese is set in a secret Nazi Factory in Germany. It has several rooms within it. The starting room is just outside the factory itself. There are four barricades against the zombies, two at either side of the Mainframe, one to the side of the power generator, and one down a staircase. There are two doors that leave the starting room and lead to the right or left factory rooms.

Other:Pack-a-Punch Machine - 5000 points per use, locked until power is turned on and all three Teleporters are linked.Radio - Beside a barrel under a ledge near the entrance to the staircase barricade.
Mainframe - used to connect the Teleporters, all of them lead here. 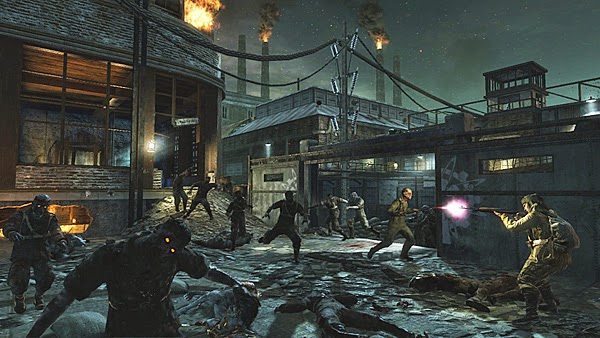 Right Hallway (Automobile Garage) After opening the door in the right factory room, players come in here. In here is a staircase leading to a box barricade. Two barricades are in here.

Weapons Available:Thompson - 1200 points
Monkey Bomb - in the furnace, only there after Fly Trap is activated (Not Acquirable)

Other:Mystery Box spawn at the far wall adjacent to the furnace

Left Factory RoomAfter opening the door on the left, there are two barricades and a door leading to the left hallway. There is also a door that will open when the electricity is turned on, connecting this room to the Mystery Box spawning room.

Other:    Fly Trap
Teddy Bear - In a window up high, only there if the Fly Trap is activated

Left Hallway (Animal Testing Lab)After opening the door in the left factory room, the player will come to this hallway. It contains the M1897 Trench Gun and three barricades. There is a staircase leading to a box barricade and another locked door leading to Teleporter A.

Spinal Cord - two of them are sitting across from each other on a desk and on top of some shelves used to activate the secret song, Beauty of Annihilation.

Radio - Above door to the right of the Mystery Box spawn

Easter Eggs:    Fly Trap: Directly outside of the main enterance to the lab. Upon firing behind the fence with a medium/long-range Pack-a-Punched weapon, Samantha exclaims that she wants to play a game, choosing the game hide-and-seek. Two Teddy Bears and a Monkey Bomb can be found around the map. When one finds all the objects, she will shriek that the player has won.

Teleporter A Room (Generator room) In the left hallway is a locked door, said door leads to the Teleporter A room. It contains the first of three teleporters. There are also two barricades in here.

Other:
Mystery Box spawn in front of the Teleporter
Radio - On the lower level in the furnace near the right staircase.

Teleporter B Room (Chemical testing room) After opening the locked door in the Right Balcony, the player(s) will enter a room containing yet another teleporter. It contains two barricades.

Other:
Mystery Box spawn on the balconySpinal Cord - on a desk beside the barricade in the side room used to activate the secret song, Beauty of Annihilation.

Mystery Box Spawning Room/Courtyard
After opening either box barricade in either hallways, the player appears on a balcony and a section just outside the factory. If the player jumps off the roof, they will come across the Mystery Box, sitting next to the power generator. There are doors leading to Teleporter Room C and Teleporter Room B. When the power is turned on, a bridge lowers connecting the two balconies and the room connects with the left and right factory rooms. There are multiple barricades in this area.

Other:
Radio - On a tipped filing cabinet left of the door to Z-B
Power Switch behind the Generator
Mystery Box spawn in front of Generator

Teleporter C Room (Main factory area)
After opening the door in the Mystery Box spawning room, it leads to a building in the factory. Inside the building, the final teleporter lies. There is also a set of stairs where a barricade is blocking zombies approaching from a cave. There is a balcony outside and is used to fire down on zombies approaching the building. The balcony is also a good spot to hold out at, as all zombies can come in from one direction and the height offers the players a good view on how many zombies are moving in.

Other:
Mystery Box spawn at the end of the catwalk above the Bowie Knife

Two radios are in here, one on a shelf in front of the staircase and the other at the end of the underground alley.


Easter Eggs:
When the player has Monkey Bombs, they can throw them into the furnace with the special grenade button. This will prompt Samantha to say, "Why are you so cruel to Mister Monkey? Mister Monkey just wanted to play!" Following this, the likeliness of a power-up increases dramatically.

Call of Duty: Black OpsDer Riese returns in Call of Duty: Black Ops with improved graphics and the ability to acquire Cold War weapons from the Mystery Box. The Call of Duty: World at War weapons that can be bought off the wall are still available, however. It was at first an exclusive for those who had the Hardened and Prestige edition but it was later released in the Rezurrection map pack on August 23, 2011 for the Xbox 360, and September 22, 2011 for the PlayStation 3 and PC.

Information sources for this post are taken from the Call Of Duty Wiki pages available online at: http://callofduty.wikia.com/wiki/Der_Riese