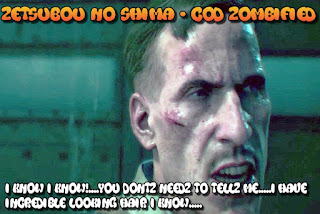 here is the map layout area for the SWAMP area just behind LAB A area in Zetsubou No Shima. This area houses a zombie trap in the form of aeroplane propellers spinning at a few thousand RPM and making diced meat out of zombies as well as:


And a partridge in a pear treeeeee (sings)....no seriously there is no partridge on this map however I did get carried away in song listing those items.

Now lets get down to the map layout for LAB A SWAMP AREA: 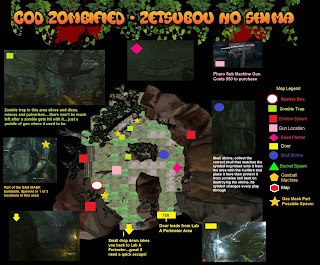 The GAS MASK is needed to complete the main Easter Egg for this level, as well as offering protection from the ORANGE SPORES that infected zombies release or if you accidentally shoot one of them growing on the wall. 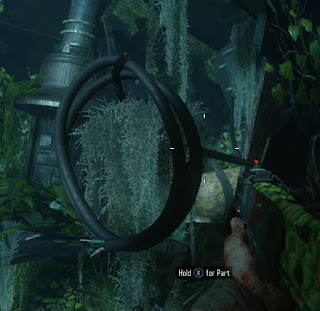 Wearing the gas mask means that you will no longer suffer the effects of choking and being unable to fire for a few seconds when you come into contact with orange spores. It is also needed when you fix the elevator to take you down to the main boss fight and stops you choking on all the gas, and eventually going down, in the bosses main layer underneath the bunker. 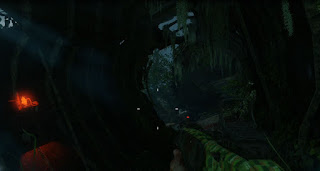 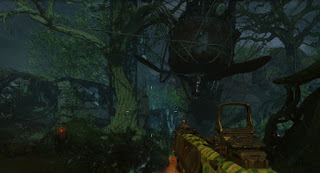 The zombies traps in this area are very affective if you can train a large horde of zombies into  a line or queue like system.....each of them not queuing for their daily grocery shops, but to be grinded up into zombified dog food.  Just be careful when you get a bit overcrowded you don not run into the trap yourself by accident which I did a few times as you go down pretty much instantly....its going hurt if you run into it....trust me...I have the bruises to prove it. 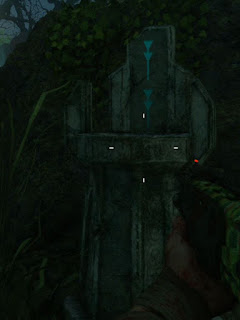 There is of course a skull shrine here which is part of the MAIN EASTER EGG you may want to check out where you need to match the skull to the shrine and place it onto it, then protect it for a certain amount of time from being under attack from zombies who are not interested in attacking you but only the shrine. Just remember that the symbol I have taken a picture of here may not be the symbol on your play through as it changes every round so don't panic if its not the same symbol as yours in this area.