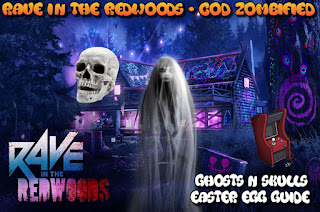 CLICK HERE TO GO TO PART 1 OF THIS GUIDE

Now to activate the 3rd skull to satisfy the Skulls N Ghosts 2 arcade machine, simply head down to the power room where we will attempt to show off our knife throwing skills at a zombie who wants to join the circus....as a target?

I paid him a few bucks and he hopped willingly onto a rotating target with the skull....he then said he was not nervous with such a professional knife thrower about to throw at him. That's when I broke the news and told him it was your first time and he wanted to cancel the show...I told him no way :). 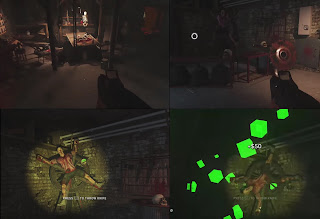 We need to play a mini knife game, which is very easy, and consists of a rotating zombie stuck to a target which has a skull on it. Simply use the throwing knife once the game is activated to knock the skull off this target and it is all yours. Simples, skull number 3 will show on the arcade machine screen, your half way there keep at it!

In the same spawn locations where the symbols started to appear in Step 2 for matching the symbol that appeared on the Ghosts N Skulls 2 Arcade machine, we are going to use these symbols to spell out the work "SKULL". This is obviously spelt in an ancient language which I tried to pronounce in the symbol form but got my tongue tied at every corner.

The above picture was taken from MrDalekJD's video at the bottom of this post and it was in turn created by Glitching Queen on YouTube. 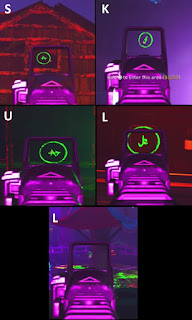 When you have located each of the letters in this exact order, simply stare at them down the sites until the symbol enlarges then disappears indicating it has been registered as your answer. Once all have spelled out the word, you will hear the weird notification noise letting you know you done it baby awwww yeah!

If you mess it up don't go nuts, simply enter RAVE MODE again and start over again, the only difference is the letters may be in totally different spawn locations to where you previously found each one. 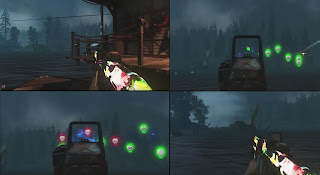 In order to get in the machine to play the proper full HD, surround sound, technicolour marvel that is the Ghosts N Skulls 2 arcade machine....we need to play the travel edition.

Head down to where the boat takes you over to the island, once you have got the 4th skull, and when you ride the boat to the island, mini ghost heads will start to emerge from the water. They will be white and glowing green behind them at first and start getting higher and higher into the air, eventually turning red and trying to escape from the area.

What you need to do here is blast them until you destroy them, before they escape, especially the red ones as they are on the verge of doing a runner! When a certain amount escape, you will have failed this mini game challenge. Put the handkerchief away though as to restart this mini game, simply get back in the boat and head toward the island again and you can have another shot at it. Take as many goes as you need to complete it.

When you have done it all of the ghost heads will disappear in a puff of green smoke and you will have obtained the 5th skull.

First for this skull you need to build the BEN FRANKLIN CROSSBOW which is the electricity version of the upgraded VLAD CROSSBOW. Check out the Upgrading the Crossbow guide.

Once you have this bow, simply walk up to the machine, shoot it with the Ben Franklin and it will unlock the 6th skull meaning you can enter the arcade machine. If playing on multiplayer, everyone will need to go up to the machine and interact with it in order to enter the machine.

How to play Ghosts N Skulls 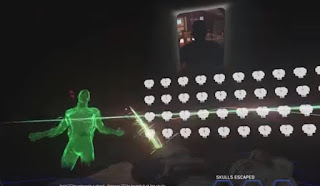 When you enter the machine, you will see rows of skulls appear which are Yellow, Green and Blue in colour. What you have to do is get rid of these skulls before they get too high in the air. To get rid of these coloured skulls, you need to use your gun like a ghostbuster to snare the coloured ghosts floating around in the background and around you.

Simply fire your gun to entangle a ghost in your particle stream and what ever colour the ghost is e.g. blue, push him over and into the blue skulls floating in the air to make them disappear and press the button to RELEASE him into the skulls making them explode.

The more you play, the harder it gets

As the game progresses, the order of the coloured skulls starts to change and gets much more trickier so don't say I didn't warn you. For example, you will be shown a colour order of the skulls, and then they will turn around, losing their colours. What you have to do here is, remember what colour those skulls where before they turned around....which is no mean feat, as I can't even remember what I had for breakfast this morning, while still snaring the correct coloured ghosts that matches the skull colour.

IF AT ANY POINT YOU HIT THE WRONG COLOUR OF SKULL WITH A DIFFERENT COLOUR OF GHOST, you will see the skull turn RED and start to fly to the portal at the other end of the room. This mistake can be reversed however, as you will see RED ghosts floating around the room, if you can snare a red ghost and hit it on the skull that's trying to escape, it will cancel out that skull so don't fret.

We need to keep an eye on the amount of skulls that are escaping in each arcade session as if 3 red skulls escape, you will be kicked out of the machine and will have to start all over again...got anymore quarters?

There are also 3 phases to the machine, the 3rd of course, being the worst....you knew it was coming. The skulls basically start to move further and further away to the back of the room and you need to be getting your angles and aiming precise with the ghosts as its quite hard to release the ghosts onto the correct skull. The skulls basically start to back you up into a corner. 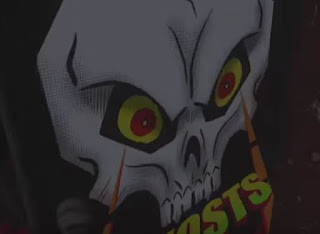 When you complete Ghosts N Skulls, you will get:

The afterlife token means that in COP MODE you will have unlimited revives to get you out of the arcade. Normally you are only allowed 3 revives and you have to wait until the end of a round before you come back. When playing the mini games you will see your character has a massive skull head on top of their shoulders.

Still unsure how to do any of the steps? Then check out MrDalekJD's video below which is very easy to follow: