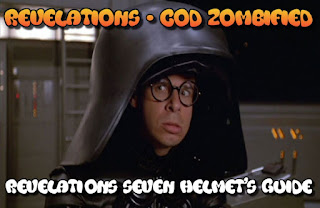 here is your guide to getting all of the 7 secret helmets, masks and hats that exist in Revelation in Black Ops 3 Zombies. Each has its own pros and cons for choosing it giving you slight advantages / abilities over your enemies or other players who are not wearing a mask.....plus you will look so cool strutting around the map in one. Most are not difficult to get.

Lets see how to get each type of helmet!

This helmet is not too difficult to get, we simply need to first head over to Der Eisendrache to the room which contains the 4 stones on the ground that turn off gravity in the room. Once gravity is turned off, you will have astonished many scientists, but also we are going to go to the location where you originally get the re-forged wolf arrow in the actual level Der Eisendrache. If you did not buy Der Eisendrache as DLC, do not worry, it is shown in the images below the location you need to head to. 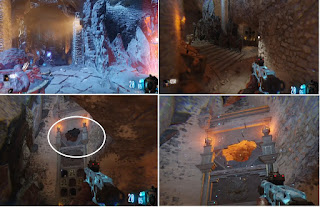 Once you get there, you will see a hole up near the top of the ceiling. It looks like some dodgy cowboy builder couldn't be bothered to finish this beautiful medieval wall and done a runner half way through the build. When you locate this hole, throw a grenade up into it and when it explodes, a skull will drop down to the ground. This skull we are going to charge up with zombie souls, about 20 of them, before heading to pick up our lovely and warm, fluffy little wolf helmet.

To charge this skull, ZERO GRAVITY MUST BE TURNED ON. When it is off, the skull will fall to the floor and any zombie or enemy kills near it, will not cause the souls to go into the skull and charge it. When Zero G is ON, the skull will be hovering above the ground and accepting all the souls you can throw at it. The Wolf will howl when you have completed this part and you can head on over to the main stage at Kino Der Toten to pick up the Wolf Helmet.

The Wolf Helmet increases your characters stamina meaning he can run / sprint for much longer that normal. Not the greatest helmet in the world but you do look bad ass wearing it. Other players will agree trust me. You will see the message "Sprint Duration Increased" when you pick it up.

This start of again in Der Eisendrache, popular destination, and you want to head over to the portal that takes you to Nacht Der Untoten and spin around looking back toward Der Eisendrache and lookup. See the broken clock sitting on top of the wall? Good, cause you need to shoot 3 numbers in this sequence on the clock face, 9,3 5 which are the symbols IX, III and V on the clock. This as you may have guessed, relates to Group 935. 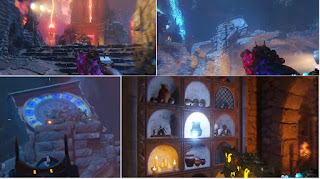 Now once we have shot the clock, we need to go around the map and start to fill up the lightning urns located in different sections of the map. These urns are charged by zombie souls, but only if they have been killed by a headshot.

The 4 locations of these urns are:

Each time you complete filling an urn, you will hear an audio quote being spoken, confirming that this one has been completed. Again once all 4 have been completed, head over to the costume department in Kino Der Toten up to the main stage and the Viking helmet will have appeared on one of the mannequins. 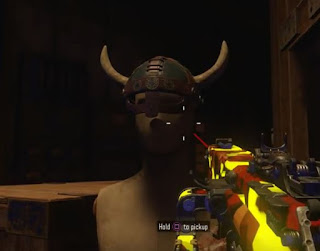 All the Viking Helmet does is gives you "+1 hit from zombies" meaning you can take another hit from a zombie before going down. For example without it and without Juggernaut, you could take 2-3 hits before you can go down, now you can take 3-4 hits before going down, simples, but could be very effective in tight spaces where you can't avoid being hit by a zombie when escaping. That last touch can make all the difference.

This mask gives a combination of characteristics from the other masks as well as adding some of its own. It gives:

This is definitely one of the best helmets money can buy in the zombie universe. To get it we first need to head over to the Giant Apothicon, and head down to the Pack A Punch area. You will notice that there is an area of green liquid on the ground. Stand in this area and wait for green smoke to fill the area, this is when tons of enemies will spawn and is the only time when you kill each one it will count towards the amount of enemies you need to kill in order to unlock the Shadow Mans Helmet. 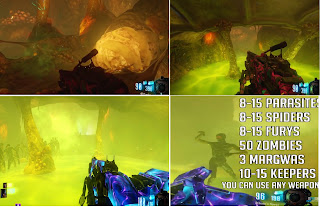 The images show when the smoke is active and when to start killing things as well as a list of the amount of each enemy you need to kill from ToProForuGames﻿ Youtube Channel Video on the subject. No idea what the green gas is it could be the giant Apthicons breath, one of its burps or farts....you decide which one you would rather be inhaling. 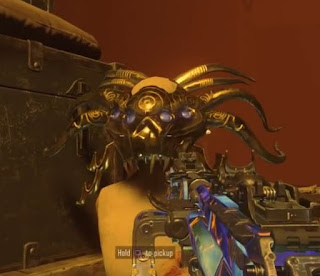 Once its finished you will hear a strange sound and you can again go to the theatre in Kino Der Toten and seach the stage area to find the Shadow Man mask to equip, you will not be disappointed with it. 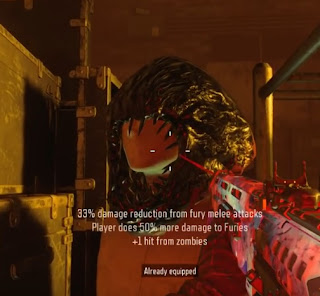 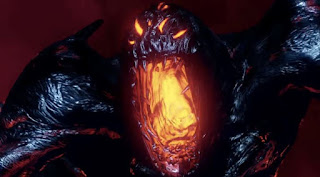 When you have killed enough Furies with conventional weapons, around 50, a sound clip will play, indicating the helmet is ready to pick up in the theatre of Kino Der Toten.

This helmet requires you already have the Wolf Helmet in order to get it. The we need to go around the map and collect all 3 parts to the KEEPER PROTECTOR.

The parts locations are in:

You then take these pieces to one of the spawn locations for the keeper protector, get the hammer and nails out and craft it. Doing this means you can summon a keeper to appear and kick some zombie ass while you put your feet up....sort of....you will still be attacked. Just don't let that zombie eat the last ever bourbon or rich tea biscuit in existence or I will lose my mind! 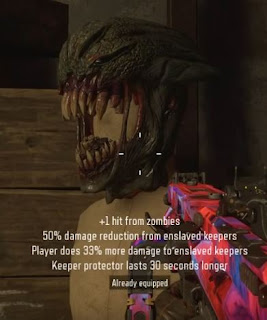 Basically you just need to get 30 zombie kills with the Keeper to get the mask. When you know its successfully completed, the audio cue will play and you can head to the theatre to pick up your reward.

This helmet is pretty easy to get as well. For the first step you simply have to get 30 kills with traps on the map whether it be the electric trap or the flogger, its up to you.

Once that parts out of the road, the second part has to do with the zombie everyone needs a change of underwear for.....you guessed it....the PANZER! All you need to do on a single PANZER is remove the face mask of him by shooting it and you will see it break and spark open, then shooting his chest plate to blow it open, then shooting his power core to kill the bugger. 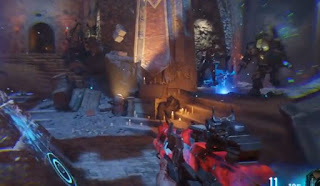 Again once you have done this, head over to Kino Der Toten and pick up your spoils of war, the Crusader Mask. 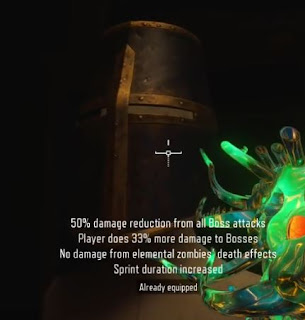 This helmet is a bit confusing to everyone on forums, facebook and anyone on planet earth who plays the game  as to what exactly you need to do to get it. We know you need to headshot elemental Margwa's and kill them with a single head shot to each of their heads, so 3 shots to kill each Margwa stone cold and is accomplished with an upgraded sniper rifle and the double tap perk equipped. You only need to kill 2 Margwa's in this way.

If there is an order to killing the elemental Margwa's such as a yellow one followed by a red one, we do not know. What does seem to work nearly everytime is killing a RED Margwa followed by a PURPLE Margwa. It is not always the case but seems the most common way of doing it.

As each Margwa is killed, if you have started with the correct colour, you will hear an activation sound. If you have done it correctly after the second one is killed...you know the drill, head over to Kino Der Toten and pick up your mask.

Having Trouble Figuring out the Helmets? Watch ToProForuGames guide here:

Thanks for reading as always!