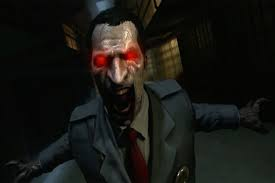 I have created the first map layout for the main room where you spawn in Alcatraz Prison, along with all points of interests, gun locations, afterlife panels (turns you into a kind of ghost , by electrocuting yourself, with shocking abilities and can self revive you when down, almost like who's who perk in die rise), door costs, parts and sign locations.

As some of you may have noticed I am using FPS Creator to make the maps in now and it saves a hell of a lot of time and looks a lot better I think. I have found some cool features in the level so far like a wall which has a wolf hound symbol painted on it which comes to life and eats the dead zombies that you kill near it. I have a video below to show you this in action which I had to video as it was just down to the bone awesome to watch :).

First though before we all get too excited, the main reason as usual you are here for is the map layout so here is the first floors where you spawn for you below, its in PNG format so not to distort the text so give it a minute or two to load as its a higher res than my other pics: 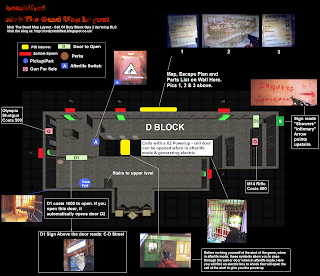 Here is something I saw on my first play through and had to film it encase I missed it or it never happened again. In one area on the second floor there is a painted wolf head kind of symbol which spawns (but luckily stays in the wall) a wolfs head that eats the dead zombie bodies that you kill near it. Once you kill a zombie, it gets sucked toward the wolf's head and you can watch it tear the zombie to shreds which is always nice :D. Check it out in my video below:

I am working as we speak on the next sets of map layouts as I have already drawn them on paper and now just putting them together along with any photos I have taken. I have only played 2 games on this level and not got too far as yet but I will slowly but surely be documenting and taking pics etc of everything I find and any secrets hidden away.

Thanks for watching and visiting guys.
Henry
Posted by Hazzman at 19:30