Upgrading the crossbow in Rave in the Redwoods - Infinite Warfare 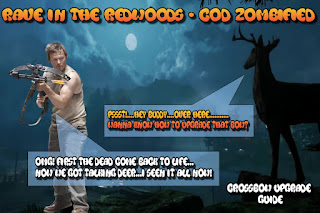 here is the guide on how to upgrade the crossbow named Vlad in Rave in the Redwoods Zombies for Infinite Warfare. As if a normal crossbow wasn't cool or deadly enough, we can go one better and can ramp it up a notch by adding things like acid rain to its attack. If the arrow doesn't kill that freaking zombie first time, the ensuing acid rain shower will.

Depending on what statues you collect and apply to the crossbow, it will give you a different upgraded effect. The animal statues and their corresponding affects on the crossbow are:

When we have collected the smaller animal statues, we will be them down in front of their larger statues dotted around the map and getting zombie kills with the normal cross bow in front of them. This will charge them up with zombie souls. Then, depending on what statue you are working on, picking up the smaller statue again will automatically apply the upgrade to the crossbow you are carrying.

Lets get down to upgrading the crossbow, first we will need to have acquired the normal crossbow. If you are unsure how to do this, check out my CROSSBOW GUIDE. As Mario says "Lets a go!".

To upgrade the crossbow, we will be looking for small animal statues throughout the map. These can be in many spawn places, around 9 or so that have been found so far. Through each play through, the same type of statue rarely appears in the same place. The same spawn location may have a totally different statue type on another play through.....so sue me.

When you see a statue, there will be a white glow around it. The statues will come in the form of little wooden and very cute carved animals.

Here is a list of the known locations on the map where statues may appear:

Now that you have acquired all of the statues, go to the RECREATIONAL AREA and locate the large array of speakers in the middle. Here, you will place all 4 statues on top of these speakers. There will be 2 dark squares on top of each of the speakers where the statues will actually go.

Once all of the statues are placed.....you probably guessed already, we need to kill some zombies nearby to charge it with their aura so to speak. When you kill zombies, you will know you are killing them the right way, either with headshots, shooting their arms off first, legs, with explosives etc. as when you kill each zombie, you will notice a little RED flicker or light when they die. This means you are charging the statues to perfection.

If you have killed enough zombies and in the right away, you will be able to pick your statues back up. So check back after so many kills that you can pick them up again and your not wasting tons of ammo on them for no reasons. Pick up each of the Statues and we can move onto the next step.

Lets find out the locations of these larger statues to get you some more kick ass fire power into your crossbow: 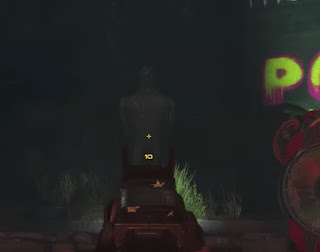 This is located facing the fire pit about a metre away from it, which is at the entrance to the ADVENTURE COURSE area, lit up very dimly by a small lantern. 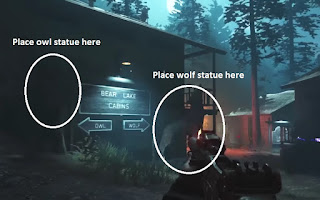 The Owl and Wolf statues are literally beside each other, either side of the BEAR LAKE CABINS "Owl" and "Wolf" directional signs.

The dear can be located just outside of the boat house near the docks area. 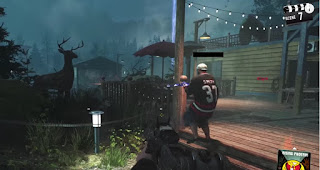 When about 10 to 15 zombies have been killed, you will be able to pick up your mini statue again. As soon as you pick it up, it will automatically apply the upgrade to your crossbow. If you want to change crossbows or apply a different upgrade to the bow, simply return to the MAIN SPAWN CABIN and get a fresh crossbow and repeat the steps again of finding the larger animal statue you want the upgrade for, place the smaller statue down, and kill zombies with the normal VLAD crossbow, then pick up the mini statue again.....simples.


Here are the upgraded bows in action:

The Trap-O-Matic allows you to go akimbo with two crossbows and you fire up to 4 or 5 bolts onto the ground at various distances apart and lure a ton of zombies in before it goes off. What it does is creates a chained electricity bolt between all of the darts you have fired onto the ground and kills all the zombies in between all of the darts, very powerful and very cool no doubt.

The WHIRLWIND-EF 5 does exactly what it says on the tin and each bolt you fire from this crossbow, blows  the zombies away like leaves.....in a whirlwind. Yes it throws them aside like a wet lettuce in a tornado. Its quite good for getting rids of large hordes of zombies in lower rounds and great for clearing zombie restricted ground space.

The ACID RAIN looks amazing and better than any fire work show I ever been to. It fires a bolt into a zombie of the ground and then it just rains what looks like sparks you see coming off an angle grinder grinding a piece of metal. It looks so cool but is also very deadly, don't worry you cannot hurt yourself by walking into this acid bath. I don't think there is an umbrella invented to withstand this kind of rain trust me.

The last bow is the BEN FRANKLIN which delivers a lightning bolt into the area where the arrow is shot to. This can take out large numbers of zombies with the lightning strike.....whoever said lightning never strikes the same place twice was laying as I shot this arrow twice in the same spot and it did so....yeah take that science!

If still unsure about any of the bows, check out MrRoflWaffles video below: