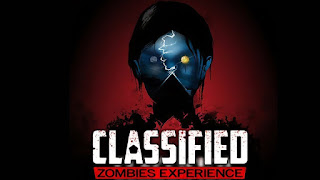 here is the map layout for the zombies map called "Classified" in Call Of Duty Black Ops 4. This map was not created by myself but by the awesome REDDIT user called "PvtLoganator" which has helped a lot of people find their way around the map who are not used to it. 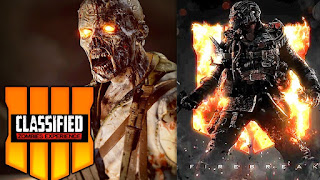 This map is very easy to follow and highlights all the key locations and important parts in the map that can help with buildables within this level, Easter Eggs and locating Perks. 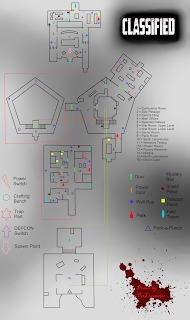 Being a reimagining of "Five", Classified's layout is mostly identical. However, like Blood of the Dead, the remake of Mob of the Dead, there are a few new rooms added to the map, including the Central Filing and Main Offices on the first floor, and the Server Room in the War Room.

The Perk-a-Colas are replaced by the new perk system introduced in Black Ops 4. In addition to this, the steps taken to reach the Pack-a-Punch Machine have also changed. There are also several new Mystery Box locations as well, with the initial Mystery Box location being either in the Main Offices or on the upper level of the War Room. 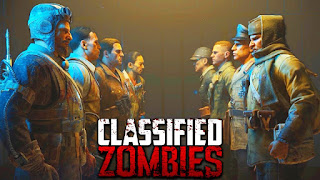 The Electro-Shock Defences return as well, although the locations for the parts needed to repair them are in different locations, with one spawning in the Server Room and the other spawning in the Porcine Research lab. The Winter's Howl also returns, and is obtainable from the Mystery Box and through completing the Project Skadi quest.

Unlike the original version, the Pentagon Thief is absent; he is instead replaced by the Hellhounds. The Bonfire Sale power-up returns, and can be acquired by opening up areas of Groom Lake, which is achieved by surviving in said area every few rounds without leaving or going down.

Thanks for reading as always guys and gals.