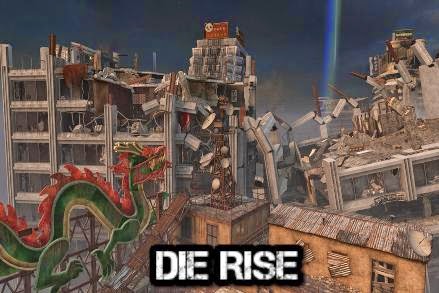 "Watch your step! Fight for survival atop the towers of doom, where dizzying heights and the relentless undead make a deadly combination."
— Map description

Die Rise, also known as Great Leap Forward and Skyscraper, is the fourteenth Zombies map. It is included in the Call of Duty: Black Ops II downloadable content pack, Revolution. It was released on January 29, 2013 for Xbox 360 and February 28, 2013 for the PlayStation 3 and PC. The downloadable content pack costs $14.99 (1200 Microsoft Points), but is also a part of the Season Pass.

Die Rise occurs in post-apocalyptic Shanghai, China; the fight against the zombies takes place on two skyscrapers. The top half of the spawn building is broken off and wedged upside-down between the two skyscrapers, bridging the gap between them while effectively acting as a third building. It is also the first map in Zombies to introduce a true element of verticality, including broken elevator shafts, upside down skyscrapers, deadly falls, and elevators which transport randomized Perk-a-Cola machines and the Pack-a-Punch Machine up and down the floors. When jumping from building to building, mattresses are scattered throughout to prevent injury from the jumps. The map contains tighter corridors and long vertical drops, unlike any other Zombies maps. 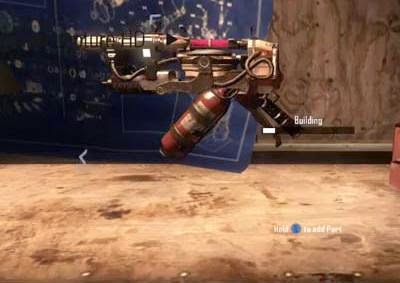 The map features a new buildable wonder weapon (similarly to TranZit), the Sliquifier. A new buildable device is also featured, the Trample Steam, which has the capability to fling players and zombies alike. Die Rise also features a new enemy, the Jumping Jack, which looks and acts similarly to Crawler Zombies. They come every five to seven rounds, and can do short teleports around the environment. There are also zombies with stronger health, identifiable by their body armor. A new Perk-a-Cola is also introduced, Who's Who, which allows the player to revive themselves by taking control of a doppleganger (with only a M1911 and Claymores if purchased) nearby who can try to revive the real character.

The musical Easter egg for Die Rise is "We All Fall Down" by Kevin Sherwood, activated by finding three teddy bears scattered across the map. The first teddy is near the SVU-AS. The 2nd teddy is near the edge of the upside down buddha room. The 3rd teddy bear is near switch on the back right corner in the power room.

Floor beneath the rooftop for building 2:
http://codzombified.blogspot.co.uk/2013/03/floor-beneath-rooftop-map-layout-die.html

More Persistent Upgrades appear to have been added to the map, one of them bearing similarity to Juggernog, and another being the toybox which can be activated by hitting the box a number of times on an early round. This upgrade has a 75% chance of giving better weapons. Additionally, Persistent Upgrades gained in TranZit carry over.

George Barkley: "Attention all on this channel, this is George Barkley, former assistant director of the CDC facility in Druid Hills, Georgia. Prior to the destruction of our headquarters, our research found evidence that contaminates are now infecting the very air we breathe. As such, exposure of some sort appears inevitable for all survivors. Symptoms are variable, but most subjects display short term memory loss, psychosis, delusion, and paranoia. Short term memory loss has also been reported, but as of yet, I have been unable to confirm this. We advise all individuals to monitor their fellow survivors, for signs of the above symptoms. Paranoia in particular! Ask yourself, are those closest to you really who you think they are? Are they following a secret agenda? Are they, perhaps, plotting against you? The dangers presented by such symptoms cannot be overstated. It is with deep sadness that I myself was forced to euthanize fourteen members of my own team. My condolences to their families. I hope this message serves as a warning to all survivors. We must all do whatever it takes, to ensure our future as a species. Thank you."

Woman: "Is there anyone out there? Please respond! I desperately need help. The others left me, I'm all alone. Help! I tried to do it, to do it right, but the others, they wouldn't... This piece goes here! This piece goes there! I couldn't do it on my own! I need help, what am I going to do? The German man stopped talking to me, and I don't know what to do...what to do..." 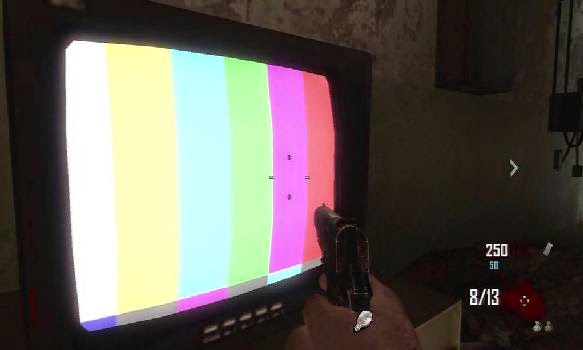 Man: "Science has failed us. He has abandoned us. In this new world, we alone are your salvation. We alone, can light the way. Hear our words. Heed our call. There is but one path to enlightenment. Just as they would consume us, we must consume them! We are the living, AND we are the dead. WE ARE THE FLESH, AND THE FLESH IS US! We will not starve. We will thrive!"

Saber 10: "Recon 5, this is Saber 10. Our sweep failed to find evidence of any survivors on site. Broken Arrow is not viable for new FOB (Foward Operating Base)." ... "That's a negative sir, records appear to have been destroyed in a fire prior to the facility being overrun." ... "Sir, we believe staff may have been trying to destroy evidence implicating them in the outbreak." ... "Understood sir, confirmed drop in T-5. Retreating to safe distance."

Man: "To anyone listening, we have food, water, and medical supplies. Enough to last several years."


Trivia from this level

PhD Flopper can be found within the map, but cannot be obtained. It is only seen in an unaccessible corridor, seen when the starting room elevator falls down to the bottom floor. Treyarch put it in as a joke to how useful it would be in the settings of this map.

While playing as Samuel J. Stuhlinger, the player can hear groans unheard by the other players characters. These groans can be heard by other players if they are down or dead.

The second half of the main building has fallen off and is upside-down. Every weapon off of the wall, including the mystery box, in that area is oriented upside-down. There are also no functioning elevators in that area.

Information sources for this post are taken from the Call Of Duty Wiki pages available online at: http://callofduty.wikia.com/wiki/Die_Rise