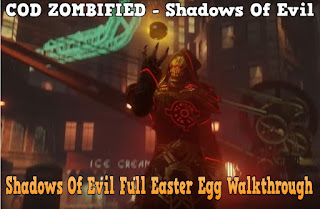 here is the full walkthrough and Easter Egg Guide to Call Of Duty Black Ops 3 zombies map Shadows Of Evil from start to finish. It will go over absolutely everything in the map so there is not a stone unturned and will give you the know how to complete the level much more easily.

It is one of the largest maps I have seen in any of the zombies maps from Nacht Der Untoten up to any of the Advanced Warfare maps, which compared to this one, are miniscule. Shadows of Evil is like an elephant and every other zombie map, in relation to size, has been a fly on an elephants behind compared to this!

Anyway without further ado, lets delve into this maps secrets and Easter Eggs.

There are 4 main areas in this map which are:

Broken Perk Bottles
First up lets explain why in different areas of the JUNCTION area, each gate that needs to be opened to gain access to the others, has a BROKEN PERK BOTTLE outside them. These bottles tell you what PERKS are available in this area once you open the gate to them. They change from game to game and are totally random so what was once in one area during one game, will more than likely not be in the same place next play through. 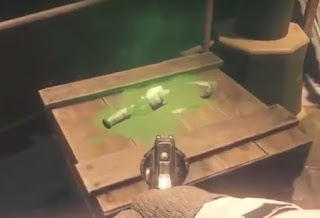 The Perks in this map are:


The Weeds / Pods that grow on the map
Around the map you will see these weeds growing which you need to use the FUMIGATOR on in order to open them. This type of searching for powerups and rewards in this manner is very much like the digging in ORIGINS from Black Ops 2 where you used the shovel to dig up items from the ground. The difference with the weeds is that the longer you leave them, the better the powerup, weapon or sometimes part you need, are.

They range in 3 different colours which are:

Pack A Punch
To get to Pack A Punch, the key here is to perform all 4 rituals that are located on the maps around the level. In order to perform a ritual at each site, you will need at least two things. The first thing you need is the SUMMONING KEY which is in the main spawn area called EASY STREET. It is on the back of the pickup truck in the alleyway in a crate and must be smashed open while you are the BEAST.
To complete the full Easter Egg on this map, you will need 4 players to do so. The first step in completing the Easter Egg is to complete each characters RITUAL TABLE. Once each RITUAL table has been completed, you can then open up the Pack A Punch machine which will help set things in motion to completing this level.

Before you can start any of the rituals, you will need the SUMMONING KEY which is located in the main spawn area called EASY STREET. You need to turn into BEAST mode and then smash the box on the back of the truck in the alley way to reveal the key. When you turn human again, go over and pickup the SUMMONING KEY. Without this key, none of the rituals can be performed.
In order to perform the rituals, you will also need personal items that relate to the characters within the game, one for each character. Each area of the map belongs to a certain character, for instance the boxers district is the Waterfront District where you can find his boxing ring near the pier.

STEP 1
THE FOUNTAIN PEN - NERO'S Personal Item
The first Personal Item however which is accessible right from the start is Neros Lawyers Fountain Pen, which is just outside EASY STREET in the JUNCTION area that connects the whole maps areas together. Turning into BEAST mode and shocking the crane you see overlooking the market area, will make it turn around. Once human again, go over and pick up the FOUNTAIN PEN. When you do, gate keepers will spawn, 2 of them, and attack you so keep an eye out. 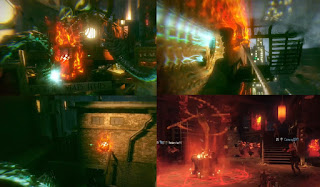 To perform the ritual, you need to go to NERO'S LANDING from EASY STREET, however you will notice that there is a mechanical gate which is closed that grants access to the stairs up to it. You first need to turn into BEAST mode and go just outside the EASY STREET door, look up to the fire escape where the SHADOWMAN was standing at the very start of the game and press the grapple button. You will see a grapple icon on the Eagles Head Statue sticking out of the side of the building.
You will be hoisted up via your alien, slippery tentacle thingys and granted access to Nero's Workshop. Run to the back of the roof and go down the stairs and there you can shock the POWER SWITCH to open the gate. This will allow your human form to make it up those stairs. Place the SUMMONING KEY on the ritual table, then press the action button X or Square again, to place the FOUNTAIN PEN down. 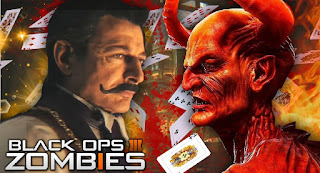 Once the pen is placed onto the ritual table, the RITUAL will begin. Once a Ritual is initiated, it is pretty much the same as activating the generators in ORIGINS in Black Ops 2. You just need to activate them and hold out for a certain amount of time, while you are attacked by demons that come out of various portals.


When it does there is a set time until it ends and Gate Keepers will appear while the ritual is going on, spawning continually no matter how many of the blighters you kill. They can overwhelm you at times so keep moving around the room and do not stand still for too long or your mince meat. Once the ritual is complete they will vanish and the body that was floating on the RITUAL TABLE will come down into a pile of bones. On the table you will now see a GATEWORM piece that you need to pick up and take with you. 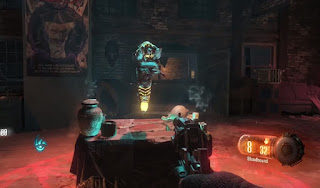 Once the ritual is finished, they will disappear. When they do, go over to the ritual table and pick up the GATEWORM that will be left behind by each sacrifice. There are 4 GATEWORMS to collect, one for each persons ritual room, and these will be used to open up Pack A Punch.


Lets move on to step 2 of the Easter Egg Guide

If you are stuck at any point in the guide look up the great Mr DALEK JD Videos which are great. This is the Entire Easter Egg Below: