in this post I will show you how to get the awesome Elemental Sword in the Shadows Of Evil Map in Black Ops 3 zombies. It is an awesome weapon that makes mince meat out of zombies by slicing and dicing them faster than a food mixer with two of its different styles of attacks. 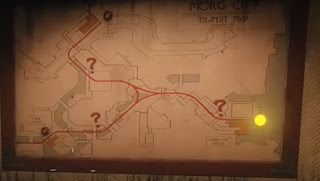 To get this amazing weapon, you need to take note of 3 symbols that you will see in 3 windows, located in 3 different places throughout the map. If you find a map of the TRANSIT SYSTEM, it will show you the locations of these symbols. When coming up to a symbol location, if you stay on the Bootlegger side of the train and keep looking out toward the passing buildings, you will see what appears to be an open window. It all of course depends on what way or station you are travelling to what side they appear on.

When you come past the window square on you will begin to see a symbol.  Take note of this symbol as it will be used later on to unlock a doorway. If you are playing on SOLO mode, it is easier to pause the game and note down on a piece of paper the shapes that the symbol has on it. You need to ride the train at LEAST 2 TIMES to see all 3 symbols.

The 3 symbols that you see in each window change every game, so using the same symbols as soon as you start a new game at the door location that lets you access the sword, will more than likely not work the next time around. They will be used to gain access to the sword location, which will in turn, contain an EGG that needs to be charged in order to release the sword.

This is a similar kind of charging an item like in the zombie map "ORIGINS" in Black Ops 2 where you had to charge boxes to make them disappear by killing zombies nearby and it sucked their souls into the box. 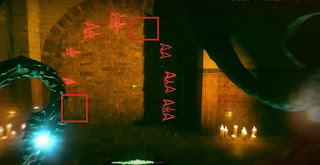 Once you have the symbols jotted down, you need to go down to the RIFT location and program them into the wall while you are the BEAST. It doesn't matter what order the symbols are in, as long as they are the same 3 that you saw inside the windows. Simply shock the 3 symbols with the electrified tentacle and they will disappear and open the wall with the symbols on it up to reveal the swords location.

All of this happens in the RIFT area, simply change back from the BEAST and go back to where the sword is and pick up one of the eggs to charge. As you can see there are four swords for all 4 players and 4 eggs, all of which can be charged simultaneously between 4 players. The eggs are called "Apothicon Eggs", walk up to them and hold in the use button to pick them up. 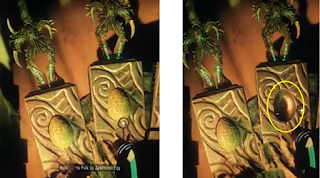 There are 4 statues around the map where the Eggs must be put into and charged. To charge the eggs, simply kill zombies near them and their souls will be absorbed into the eggs. Once the eggs are fully charged, they will glow blue. You must then take the egg and run back to the sword location and put the charged Egg back into its place. Then pick up another and find another statue to set it on and charge it in the same way. 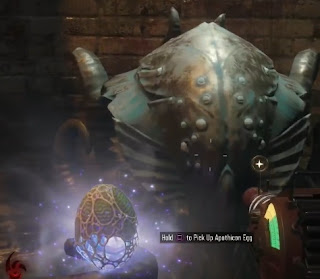 ﻿To find these statues, you will have to be in CURSE / BEAST mode as they are contained in boxes around the map that need to be smashed open in order to charge them. Be careful when you find these statues as they are in very small rooms or tight bottle necks of the streets which can be quite troublesome if you do not have adequate weaponry to deal with large zombie hordes at short notice. Run back with your last egg once charged and it will unlock the Apothicon Sword called Shubozzor Ullagua.

When you activate the sword it will allow you about 30 seconds use before it needs to be charged again. Getting MAX AMMO does not charge the sword any quicker, only killing zombies does. 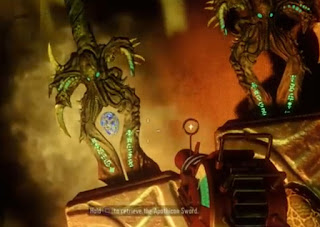 If you are still uncertain on how to get the sword, please watch the following video:


Thanks for reading guys and in my next post I will show you how to upgrade the sword!