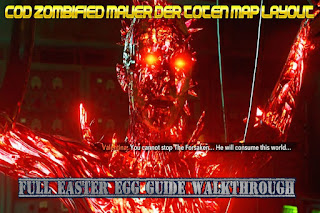 Back to Part 2 Of the Easter Egg Guide

Time goes by so slowly

In the previous step we did not activate the Disruptor Satellite, as when we do, there is a specific time limit that the next parts need to be completed i. Getting it wrong means the game will end if you cannot do it in time, so to give yourself ahead start we will do the following first before activating the satellite.

First we will head over to the tent that is to the right of the TRIALS COMPUTER and in the corner of this tent, there is another computer where you can activate the DISRUPTOR SATELLITE. 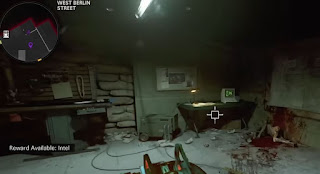 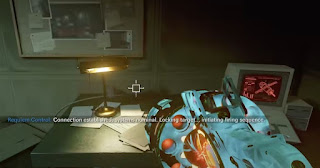 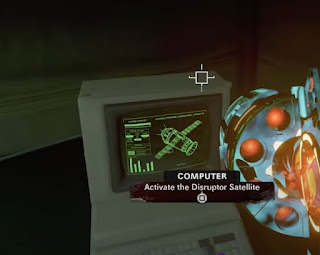 Go up and hold the use button on this computer to activate the satellite and when you do, you will see a beam of light come down outside from the sky and it will spawn in tons of zombies, mimics and most importantly 2 MEGATON ZOMBIES. 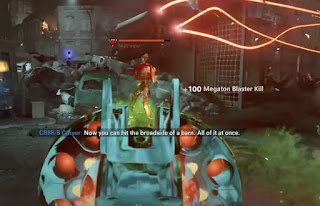 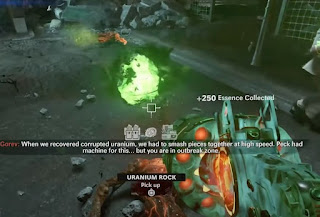 We need to kill all the zombies and get a good run at the MEGATON ZOMBIES, killing their first part, then their second part when they split in half. When they are both dead, they will each leave behind a piece of URANIUM ROCK. As soon as you kill the last MEGATON ZOMBIE, the timer will start and you only have 5 minutes to do the next sequence of events related to the 2 URANIUM ROCKS. 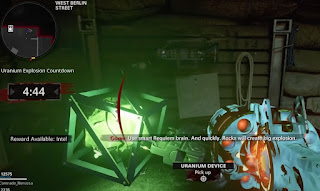 For these rocks we need to: 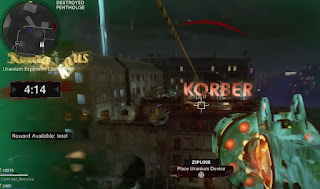 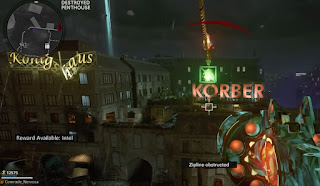 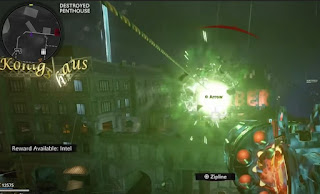 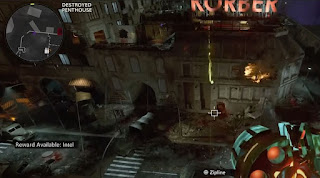 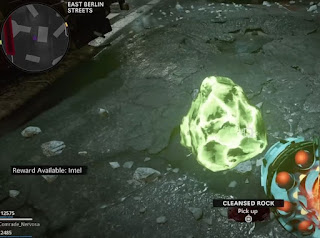 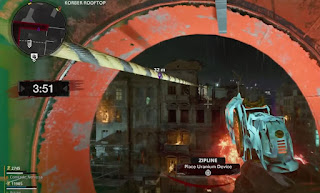 Once you have done this, an animation will play, whether you are in solo or multiplayer, and you will see the 2 pieces of glowing green URANIUM slide down the zipline and smash into each other. When this happens, you will notice a part falling to the ground in the EAST BERLIN STREETS. This part is called "Cleaned Rock".
Once the two pieces have smashed into each other, the timer that was tickling down till the end of the world will stop. You can now head down there and pick it up the "Cleaned Rock". When you pick up the URANIUM and the CLEANSED URANIUM, you will also notice you will take tiny amounts of damage due to the radiation from it. You can drop it anytime the URANIUM or CLEANSED ROCK if your health needs a breather / recharge. 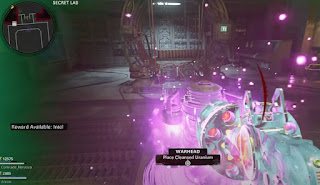 Head back down to the SECRET LAB area and place this CLEANSED URANIUM on the machine that contains the ESSENCE CONTAINERS filled with Tempest Essence. Gorov of course will mention that it is not quite enough Uranium, typical, so we will need to get another piece of Uranium and bring it down here.
When 2 Uranium Atoms become 1....again
Now what we need to do is basically rinse and repeat the previous step again and call in the Disruptor Satellite from one of the computers in the map, preferably in the West Berlin Street area, kill the 2 MEGATON ZOMBIES that spawn in from the massive light in the sky. Be careful here though as this will spawn a second count down timer of 5 minutes that you will need to do this in or the whole city will be levelled to dust. 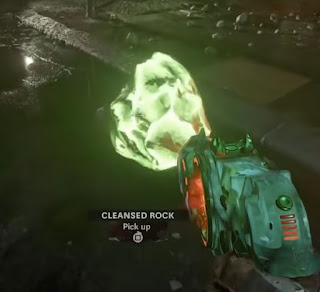 Then build 2 new URANIUM DEVICES using the buildable table, slide the two pieces along the ziplines we used before and smash the two Uranium pieces into one cleansed piece. Pick it up as it falls into the East Berlin Street below between the Destroyed Penthouse and Korber Rooftop areas.

You then bring that back into the Secret Lab Area and insert it into the Warhead which will then activate the boss fight. Before you do this, make sure every weapon is Pack A Punched, all armour is upgraded, tactical and lethal grenades are loaded up and your perks are to the max!
Lets Boss It!
When you put that last piece of URANIUM into the warhead, it will initiate the boss fight, who in this instance is VALENTINA. She is not as pleasant as I thought she would be meeting her in person as she seems hell bent on reducing us to a pile of ash onto the ground with her attacks. Lets see some of her attributes and attacks that she will perform on us.
Shields up, blue alert?
She has a shield, basically an extra layer of damage to take out to make our job even more difficult, just like the armour we wear in the game, only hers recharges. You need to take this blue shield meter down before you can damage the red health meter.

Flame Attack
This is where she raises her arms and makes 3 fireballs appear above her head, which she then directs almost like beams of flames toward you to totally obliterate your army. 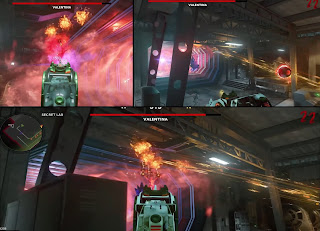 Careful you don't get cornered by zombies and hit by this when in a corner as it totally destroys your armours in seconds.
Health Regeneration
Sometimes she will summon and spawn loads of zombies around her in a flash and some of these zombies will be floating beside her. 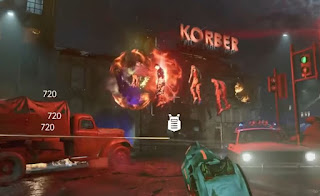 What these bad boys are doing is actually recharging her health, so take them out ASAP as all of your hard work up until this point start to be cancelled if she gets back to full health again.
Instant Down
This is a white mechanic / instant down kind of attack where she puts hands above her head and you get a white haziness around your HUD. She ten charges energy above her head and sends out a shock wave. 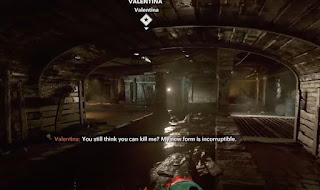 All you need to do here is simply lose line of site of her and hide behind something. This should mean you don't go down instantly or sustain any significant damage.
When her health gets to certain stages, she will move to different areas and teleport you to that location at times. When she moves to another location it will give you some time to reload ammo, get perks if you have lost any and upgrade / purchase any armour she may have destroyed on you. 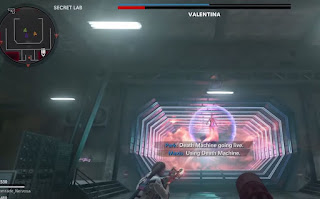 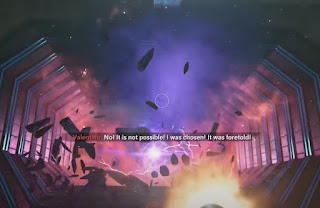 Then when your ready head over to give her what's what again each time she moves until her health is a big fat zero! She will teleport to the SECRET LAB AREA when her health is quite low and this is the last area she will go to before she dies. There will be a cut scene that plays but we are not just quite finished the Easter Egg just yet.
Then we have one last step....
Klaus old buddy, where ya been?
When the cut scene ends, KLAUS will spawn in and pick up the Warhead and Essence Containers and make his way toward the portal that appears at the end. 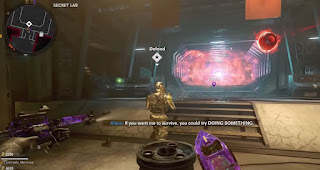 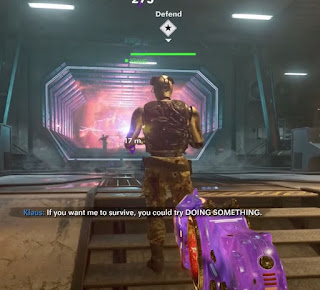 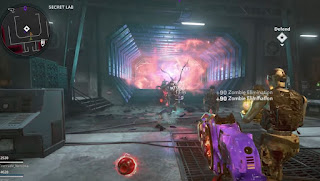 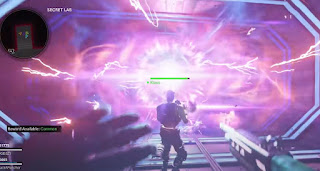 All you have to do here is defence Klaus till he gets to the end and puts the device into the portal which will then trigger the ending cut scene.
Still not sure how to go it? Then check out MrRoflWaffles video below:
Here is the Easter Egg Ending if you cannot wait to complete it yourself:
Thanks for reading as always guys.
Henry
Posted by Hazzman at 18:52