Get that wonder weapon to sick bay

Now we have the D.I.E. upgrades all completed, we need to head down to the MEDICAL BAY area with whoever has the D.I.E. wonder weapon.

On the bottom floor of the medical bay, if you look up, you will see that the machine that has been activated when you input the password into the computer in the floor above, with a purple haze inside the glass of the machine. Underneath this machine it has 4 canisters hanging down in each of its corners. 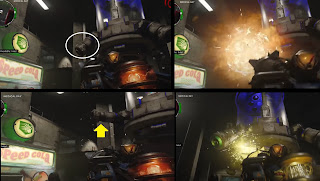 Each canister corresponds to each of the 4 D.I.E. Upgrades that you have created in the previous step. You need to shoot around the canisters for which ever upgrade you have currently equipped until you see the canister start to move up and out of the way after it has been shot.

This means that you have successfully completed this step for whatever upgrade you had equipped. Now you just need to go and upgrade the D.I.E. to the other 3 you did not have when you first came in. Then simply rinse and repeat by shooting the remaining 3 canisters until you find the one that applies to that specific upgrade. Again the canister will start moving up toward the ceiling when the correct one is shot.

Then go get another upgrade, shoot the 2 canisters until one moves up toward the ceiling, then the last one is obviously the last D.I.E. upgrade that needs equipped.

This tank got AA breakdown Cover?
After filling up the 4 canisters in the roof of the MEDICAL BAY with each of the individual D.I.E. upgrades, this will make a new dark ether portal will appear in the corridor between the MEDICAL BAY and the PACK A PUNCH machine room. When you go into this portal you will see ghosts re-enacting something that happened at the facility donkeys ago.
Then when you come back out of the dark ether portal, you will find a DARK ETHER WRENCH on the floor, which you can pick up and then run to the YARD area to fix 4 points on the tank that looks like it has been crippled by enemy fire at some point. 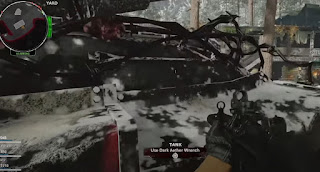 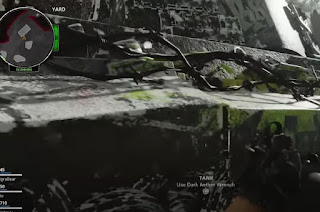 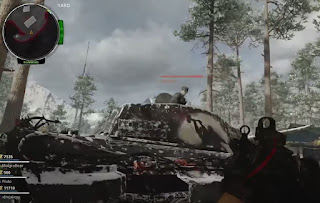 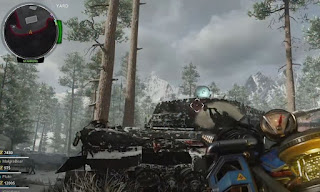 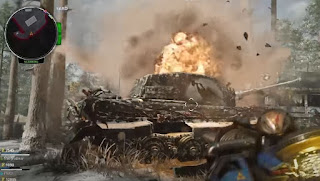 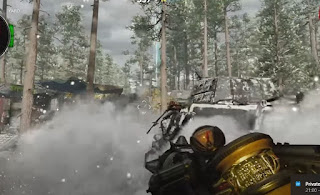 When you fix the tank, the hatch on the top will open and a peek-a-boo zombie will start giving you some guff. Simply shoot him and kill him, then find or build at the crafting table a semtex grenade and throw it so that it sticks to the inside of the hatch.
When you have done it right there will be a large explosion and a fiery red fireball. Also the tank will let out an almighty plume of smoking, which is probably more than enough to put a second hole in the ozone layer, which indicates that you have completed this step. As you walk away you may hear some gun fire coming from the top of the turret as well so that means everything is going good.
Whose up for playing football with a Decontamination Agent Ball?
Now that we have completed fixing the tank, we need to head over to the CRASH SITE area where we will find beside the cockpit of the downed aeroplane a GOLD DECONTAMINATION AGENT BALL. Pick this up and high tail it over to where you had picked up the DARK AETHER WRENCH.....people hate it when you don't return tools you borrow, trust me they will never let it go. 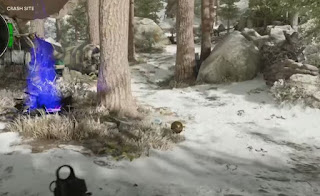 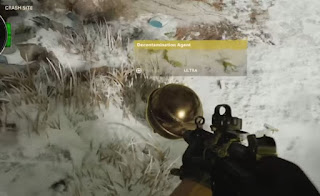 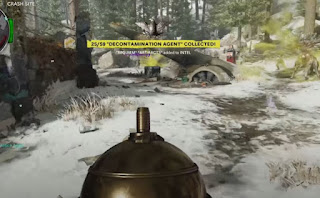 When carrying this ball you cannot fire any weapons, however you can swap weapons, which will cause you to drop the ball, then you can clear out the zombie hordes with your arsenal, before picking it back up again.
When you get to the MEDICAL BAY location of where the DARK AETHER WRENCH was located, simply place the DECONTAMINATION AGENT BALL in the machine that is glowing red. This will install the DECONTAMINATION AGENT into the CONTAINMENT UNIT. 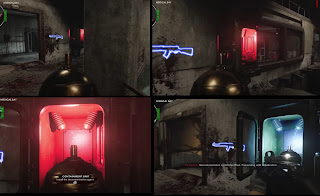 When you install this it will spawn loads of plaguehounds, as obviously this was their ball they play catch with, which you will need to destroy in order to proceed safely. 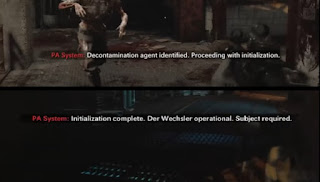 After a few seconds the computer will tell you that you need to provide a SPECIMEN to the canister. What this specimen will be is in the form of a MEGATON ZOMBIE, at the point where it splits into 2 skinnier zombies.
Once we have the 2 zombies from the MEGATON, we simply lead them to under the machine in the centre of the MEDICAL BAY that has the 4 canisters you shot with the D.I.E. wonderweapon, and they will be sucked up into the machine and turn the inside of the machine green. 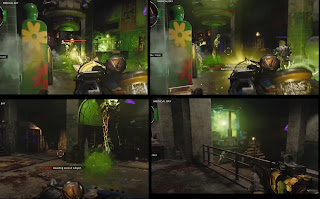 There is a small circle under the machine they need to be in in order to get sucked up into the machine. When both of them have been sucked up, this is the step finally completed and can move onto the next one.
Unauthorized Computer Access
Next, everyone in the game has to go to where the COMPUTER is in the MEDICAL BAY you had previously put the password into and hold down the interact button on it. This will trigger a mini lockdown where you must remain for a short period of time until the decontamination process is completed inside the machine and you will see changes happening to the 2 MEGATON ZOMBIES that where sucked inside. 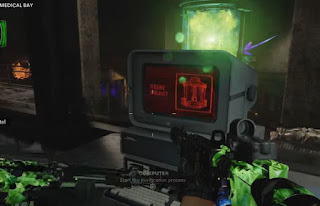 This will start the PRUFICATION PROCESS. Once it is complete you need to run out of there ASAP as a huge amount of plaguehounds, megaton zombies, normal zombies etc will be piling in and there is not much room to move. get outside to the open areas for more room to breathe and thin the zombie infestation down to a bare minimum, as we are about to go to the BOSS FIGHT. 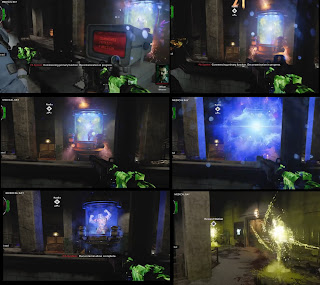 This process basically turns the MEGATON ZOMBIES sucked up into the machine into VOGEL, who you are going to protect later on in the final boss fight.
Take a picture....it'll last longer
Now for the FINAL STEP we need to head back to the LIVING ROOM area, where a new ANOMALY will have appeared to take us into the DARK AETHER. Interact with it and when in the Dark Aether, head over to the OMEGA OUTPOST AREA where you will find a blue orb that will reveal another spectral reflection in the corner near the desk. 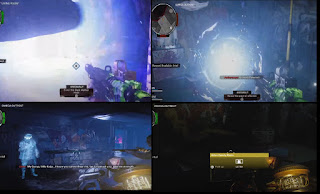 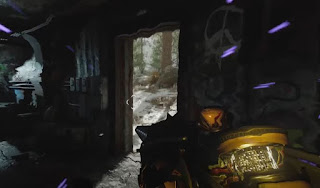 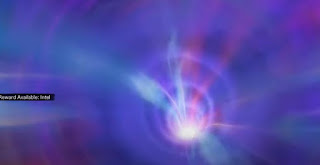 When he goes through his dialogue, he mentions a photo, when he has completed saying what needs to be said, he will drop a photo on the floor which is the ORLOV FAMILY PHOTO. When you interact with this it will immediately initiate the boss fight and throw you into the PARTICLE ACCELERATOR area, where the main fight will begin.
Killing zombies like a boss!
Now when in the PARTICLE ACCELERATOR AREA, for this boss fight, you need to actually PROTECT THE BOSS at 3 different locations around the PARTICLE ACCELERATOR ROOM....weird I know.....my immediate reaction was to shoot him dead on sight, but hey, orders are orders.
A STAR SYMBOL will be on the objective, and the mini map, telling you to PROTECT the boss as he works his magic. There is also a blue HEALTH BAR above this boss, who is actually ORLOV.
The first area he starts repairing the damage that has been done is facing the PACK A PUNCH MACHINE. 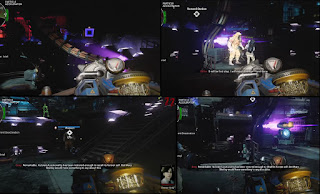 After he has completed working on this section, he moves up to the second floor and works on the circular ring of the particle accelerator itself, deactivating the primary coolant. While he's doing this a bar appears in the top left hand side of your screen showing his progress on this. 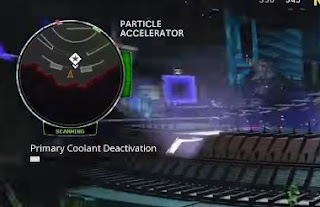 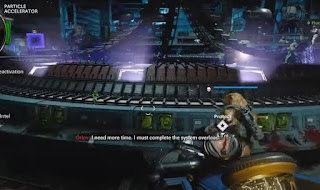 Lastly he will go under the PACK A PUNCH MACHINE on the bottom floor and try to override the FALSE SAFE DEACTIVATION. Again on the left hand side of the screen, there will be a progress bar, showing you he's not as lazy as he looks and he is actually doing something.

This is the hardest part, not to mention the most narrowest section of the room, as there is hardly any room to move at all, so suck that gut in.
Get the hell out of there!
When he has disabled the fail safe, the screen will fade to white and you need to get out of there as this particle accelerator is probably going to blow a hole in the universe and you along with it! 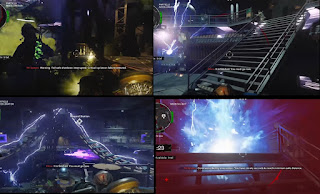 You need to get out of the PARTICLE ACCELERATOR ROOM and over to the POND AREA within 1 minute and 30 seconds otherwise they are leaving your ass behind. Its not as easy as it sounds as there is ton's of zombies chasing you and trying to stop you, as well as electricity bolts in very awkward places blocking you from going some of the normal routes you would use to exit the room so keep an eye out, as these electrical bursts can make you go down very easily. 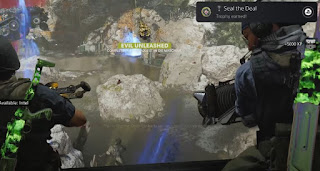 Don't worry if you all don't make it to the exfil site, as long as one of your team makes it, all players will receive the achievement for completing the entire zombies mode. If a guy goes down and your a few seconds away from the exfil chopper, leave him, sorry.....casualty of war, these things happen. 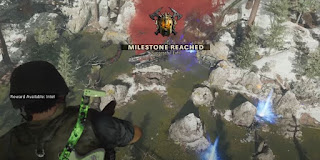 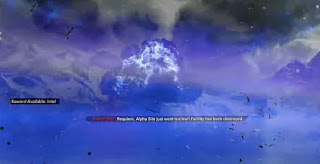 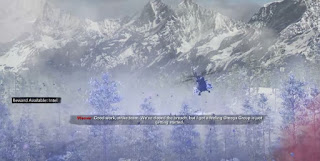 It's a much easier Easter Egg to complete compared to other zombies maps which can be a bit complicated, this one feels like anyone can do it, even on solo if you don't have anyone to play with.
Not sure how to do any of the steps? Then check out MR DALEK JD's video:
Thanks for reading as always guys.